One of the most remarkable underground house producers of the late 2000s and early 2010s, Kassem Mosse (born Gunnar Wendel) specializes in spacey, sometimes abstract – and often untitled – tracks that are deeply emotive.

Based in Leipzig, Germany, he’s closely associated with the Mikrodisko and Workshop labels, but he has also released material on Nonplus, Sounds of the Universe, and Dial sublabel Laid – the last of which is home to the confusingly titled Workshop EP, a split release with Lowtec that features one of his best tracks (“Untitled”).

From 2006 through 2013, he released one to three EPs on an annual basis. His output of longer length includes MM/KM (a collaboration with Mix Mup, released on the Trilogy Tapes in 2012) and the double-LP Workshop 19 (Workshop, 2014). He has also recorded as Seltene Erden (for Mule Electronic), Gunnar Wendel (for Omar-S’ FXHE), and the Siege of Troy (for his own Ominira).

Kyoka works as a musician/composer in Berlin and Tokyo and is known for her chaotic and direct musical approach and a heavy-rough sound, resulting in a broken pop-beat with experimental yet danceable rhythms. A quote by Ryuichi Sakamoto may underline the exceptional talent of Kyoka: “Panic! It sounds like a toy box turned up side down. How can she make such pretty and chaotic sounds!? I love it!”

THE VSQ (I’m so blasé, Kalk Pets) aka Hanno Leichtmann is a producer and curator based in Berlin. His sets are mostly electronic, between house, techno and related. Some very obscure records always find their way into his sets. 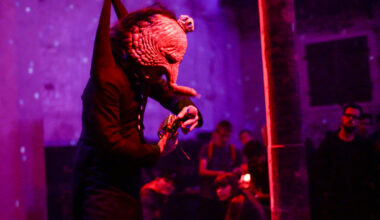