Born in Ottawa in 1988 and raised between the province of Quebec, Washington D.C. and Paris, Myriam Gendron settled in Montreal at the age of sixteen, where she currently makes her living as a book dealer.

In 2014, she released Not So Deep As A Well, a nine-track album made from poems by Dorothy Parker that she set to music. The critically-acclaimed record, released by Feeding Tube Records and Mama Bird Recording Co., was picked for many best-of-the-year lists. Richard Meltzer wrote that Not So Deep As A Well, “is the hottest—and FINEST!—Impossible Love collection in, I dunno, 30 years.”

1. I’m not too crazy about the idea of listing 3 facts.

2. Even less crazy about stating a second one.

3. Getting to the third was really exhausting.

It is hard to give a short and simple answer to this question. I guess many elements of life feed music in the most surprising ways but certainly
both the melodies I heard and love and the books I read somehow inspire my songs. I guess the life you live inspires the songs you write.

I have been playing music since my early teenage years but I’d say that the actual creation of the songs on my first album came nearly by accident. I fell upon a collection of poems by Dorothy Parker called “Not So Deep As A Well” and I heard music in my head as I was reading them. Encouraged by people around me I turned these into songs that eventually became my first album, “Not So Deep As A Well” (2014). And then I realized I could write music that meant something to other people.

Drinking beer in the subway.

Try to find another world.

Artists that I get along with but who play music that is very different from mine.

Not essential but fun to explore. Way more important in the recording or performing process.

My sisters are great. 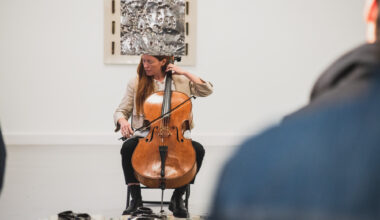