What happens in the body of musicians when they play? How does the music enter the body, penetrate it, make it vibrate, move, bring it into resonance with the score through this simultaneously inert and living object: the instrument?

With IN YOUR HEAD, choreographer Pol Pi and the renowned Berlin Solistenensemble Kaleidoskop devote themselves to Shostakovich’s 8th String Quartet and reveal an ’embodied’ music. Shostakovich’s score finds not only a musical, but also a precise physical realisation, which includes the breath, movement and affects of the four performers equally in very personal interpretations of the work. In the interplay between staves and gestures, solo and quartet, silence and the rhythm that connects them, a subtle choreography unfolds that makes the music as visible as the movement audible.

Dmitri Shostakovich dedicated the String Quartet No. 8 in C minor, op. 110, to the victims of war and fascism. The theme, built from Shostakovich’s initials (D – ES – C – H), acts as a ghost hovering over the music, processing the shadows of war and oppression that the composer himself experienced during his career.
The score, meticulously adhered to and controlling every breath, finger movement and limb movement, acts as an intermediary between the language of the notes and the language of the bodies.

After its world premiere during the Montpellier Danse Festival in June 2022, the piece is now coming to Germany for the first time.

IN YOUR HEAD by Solistenensemble Kaleidoskop & Pol Pi 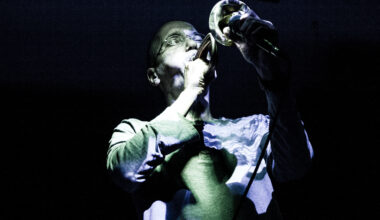