Grand Jeté is an electronic music series at OHM Berlin club, located in the industrial complex of Kraftwerk Berlin (in the immediate vicinity of TRESOR club). Started in 2014, this year’s Grand Jeté series will again present electronic live acts sharing the stage with several DJs on five Thursdays from July to November 2015.

The participating artists come from different musical backgrounds, however all performances at Grand Jeté will have one thing in common: the exploration of rhythm and sound. A thrilling listening and dance event guaranteed.

Atom™ aka Uwe Schmidt has earned global notoriety for his many projects, collaborations (w/ depeche mode, air, bill laswell) and musical styles. To date, he has published 182 albums under various labels and names like senor coconut, lassigue bendthaus and atom heart.

Hailing from Barcelona, DJ and radio presenter Vinilette moved to Berlin in 2010 looking for new challenges. She is now an active member of the female:pressure network, organizing parties and festivals. She released and remixed for labels like Blaq, Monika Enterprise and Ware.

The opening DJ set is performed by Strobocop aka Thorsten Lütz (founder of record label Karaoke Kalk) and the VSQ aka Hanno Leichtmann (producer and curator based in Berlin). 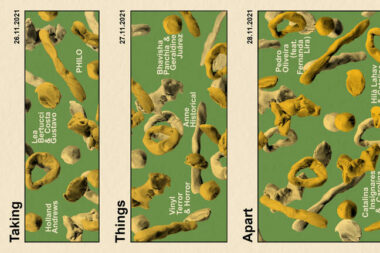 Taking Things Apart is a three day micro-festival around sonic practices and scores. For the festival, the invited…
0 Shares
0
0
Back to top