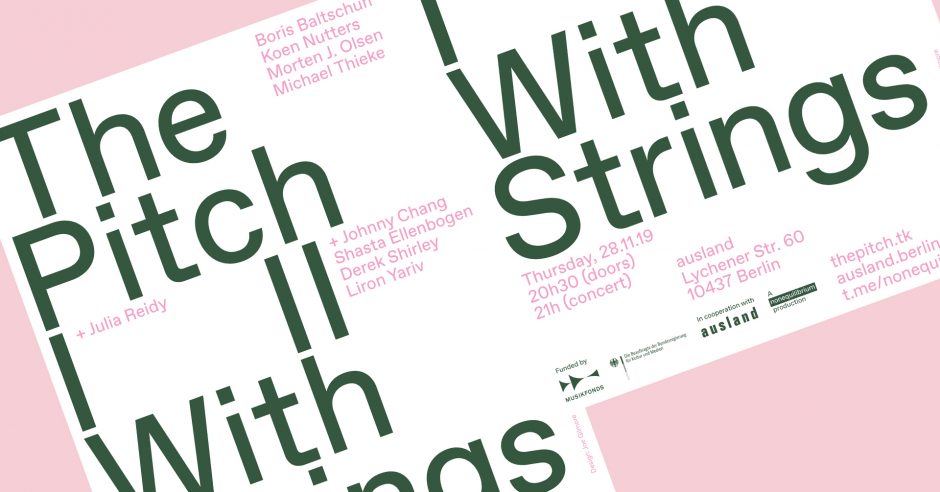 The Pitch with Strings / Tenth anniversary concert at ausland / Thursday, 28.11.2019

For its 10th anniversary The Pitch is treating itself and its audience to a concert with two new pieces with many extra strings. A quintet with Julia Reidy on 12-string guitar and an octet with Johnny Chang and Shasta Ellenbogen on viola and Derek Shirley and Liron Yariv on cello.

Founded in Winter 2009 in the Neukölln living and working quarters of Mr. Olsen, the quartet has come a long way – from their more open and fluid improvisations in the beginning to more composed structures later on. Along the way they have collaborated with a cast of characters from near and far, arranged the classics, added subtle electronics, played together with other improvising quartets, and created a body of collaborative work for both their quartet and for larger groupings such as the Frozen Orchestra projects of which several live recordings have been released.

The two new extended pieces they will present in ausland draw from all these experiences, and will each introduce new elements hitherto unexplored in the context of the band’s playing practice. Each piece will be using a specific structural characteristic and playing style to dive deeper into what a pitch can be and to surface the hidden qualities of tone and intonation in slow motion.

This concert will also be their next step in moving towards a more Just intonation. Their concert this summer at Kantine am Berghain already introduced the retuned vibraphone. Now it’s time to add the newly ad-Just-ed organ. Expect some deep forays into harmonic and subharmonic territories by The Pitch with Strings.