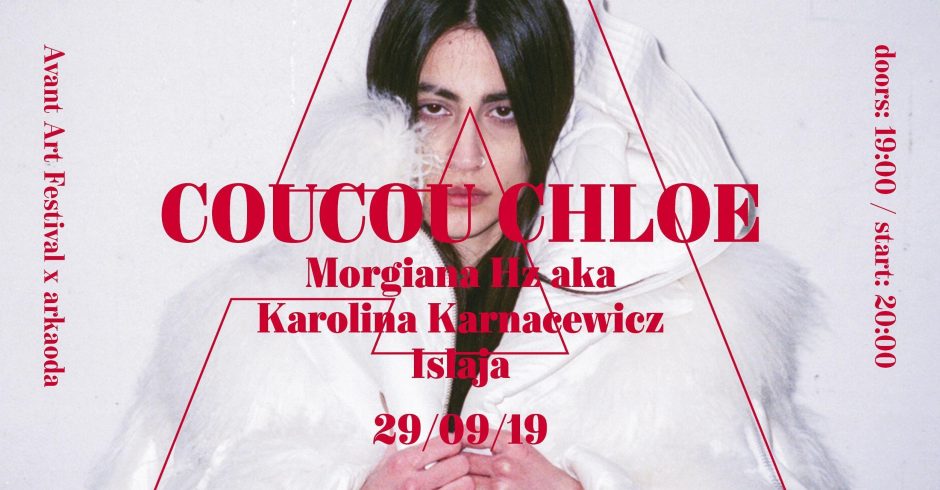 Avant Art Festiva (AAF) is a Polish trans-disciplinary festival taking place in Wroclaw (Breslau) and in Warsaw. Since 2009 AAF presents the widest array of the experimental, electronic and avant-garde music and art. This year, together with arkaoda, Avant Art Festival invites you also to Berlin for one evening!

French producer/vocalist/DJ Coucou Chloe – a resident of both London and NTS Radio – released her debut EP Halo (on Creamcake) only in autumn of 2016, but much has happened since then. With her track ‘Doom’ appearing as part of the soundtrack for Rihanna’s Fenty x Puma show at New York Fashion Week in September 2017, the scene was set for her ‘Erika Jane’ EP – this time on nascent record label NUXXE, which she co-runs alongside Sega Bodega and Shygirl. With a thoroughly modern sound that has gestated online but lives primarily in the club, her beats range from sensuous and slow hip-hop bangers – complete with her modulated vocal raps – to nervously energetic, four to the floor with a twist. Playfully experimental but always with an ear tuned to pop, Erika Jane was the best realization of Coucou Chloe yet… until 2019’s ‘Naughty Dog’ EP. With sumptuous trap-adjacent production and a no fucks attitude, Naughty Dog is another reflection of Coucou Chloe’s blasé charisma.

Morgiana Hz thinks of music as vibrations and sees sounds as waves of colors. To fully conduct her hybrid live sets she combines the binaural field recordings, turntables, contact microphones, sensors, accelerometers and crystal scanning with the use of extended vocal techniques and unconventional sounds produced with her vocal cords and larynx. In addition to hir natural synthesizers and performative installations ze experiments with geometrical dance figures. Morgianas Hz’s tracks resonate with the heart of the earth and are based on Pythagorean 436 hz tuning. They focus on energetic programming of intentions, which the artist practices not only in music. Morgiana Hz is a part of SHAPE Platform, and has previously performed at such festivals as Nyege Nyege and CTM.

Islaja is Merja Kokkonen: a composer, performer and recording artist based in Berlin. Since her debut in 2004, she has released four albums on Finland’s Fonal Records, one on Thurston Moore’s Ecstatic Peace label and one on Berlin-based monika enterprise, as well as a series of singles on labels such as Not Not Fun and Root Strata. The most recent album Tarrantullacame out on Svart Records in December 2017. She earned quick praise in the international music press for her unique vocal style and daring DIY approach to music composition, with kudos from the Wire magazine, Pitchfork and Tiny Mix Tapes. In addition to her solo work, she also performs with Monika Werkstatt, an all-female collective founded by Gudrun Gut. This Berlin-based group of international artists organizes workshops, panel discussions and collaborative concerts and aims to provoke discussion about women in electronic music.