It is our pleasure to announce the first Scottronics festival, a unique adventure in modern Scottish music presented by Digital in Berlin. Far removed from conventional club music, Scottronics focuses on music that is both challenging and complex, yet still a pleasure to listen to.

Although this appearance by Christ. is his first concert in Berlin, he is no newcomer. A founding member of the legendary ambient group Boards of Canada, he paved the way for contemporary ambient music.

His songs are produced LIVE on an array of electronic instruments and he is accompanied by a drummer who adds to the energy of the performance creating a truly unmissable concert.

A John Peel session was in discussion for a while and eventually came about in December 2003 with Christ. playing alongside Schneider TM. John personally requested that Christ. do a session and his gratitude was more than evident when, after a superb live performance, he even asked for an encore, which hardly ever happened.

Also representing Edinburgh is, Araya, a young Scottish producer who knows how to build deep vocals and string arrangements into his intricate electronic compositions.

“Melodic delicate sounds, transformed into a serious of glitch and breaks possessing as much energy as emotion, this is a chap already making a name for himself from Inverness to Edinburgh and now Glasgow. Go see him.” – TRONIC GLASGOW

Opening the live concert proceedings for the evening is local resident with Scottish origins, O.S.T., whose spacious soundscapes have gained favor with the likes of Autechre who invited him to support them at their recent Berlin show in 2010 and to perform at the edition of the All Tomorrow’s Parties festival they curated in April 2003.

“It is named advanced post-techno, where the beats are replaced by the darkest of atmospheres. Industrial undertones echo, fall and hover on the edge of time. The sounds become an extention of life and death and everything around and inbetween. Listen, just listen.” – HAIRE ENTERTAINMENT

Ben Butler & Mousepad is the brain child of Joe Howe (Gay Against You, Germlin, Joemus), exectuted with friend and co-conspirator, Bastian Hagedorn.

Taking as much inspiration from Progressive Rock’s excesses as from the clean, crisp “whoomp” of the Scandinavian club scene, BB&MP is an electronic mess, teetering on the edge of disaster, reigned in quickly by a persistent pummelling beat or lightning-fast arpeggio. When things slow down,  there is room for more consideration / analog wobble and warmth, weird chords and byzantine structures, all shot through with enthuisiasm and clumsy energy.

“Hopefully, if everyone hears (this track), laptop musicians will realize there’s more to life than trying to ape Autechre’s Amber, and documentary makers will stop being so smug about punk “killing” prog. And then we’ll all join hands and strut to this.” – MAX TUNDRA, EARPLUG CHARTS

The Badeschiff is certainly Europe’s most unusual swimming pool, it floats on the River Spree and has a concert venue and a panoramic view of the Berlin skyline.

The main stage is to be found in the Glashaus and the whole building complex is in the 20s modernist style with columns, a foyer, cafe and bar. This unconventional location with industrial charm stands on a site with a lovely view of the River Spree, where previously border police patrolled the Berlin Wall. 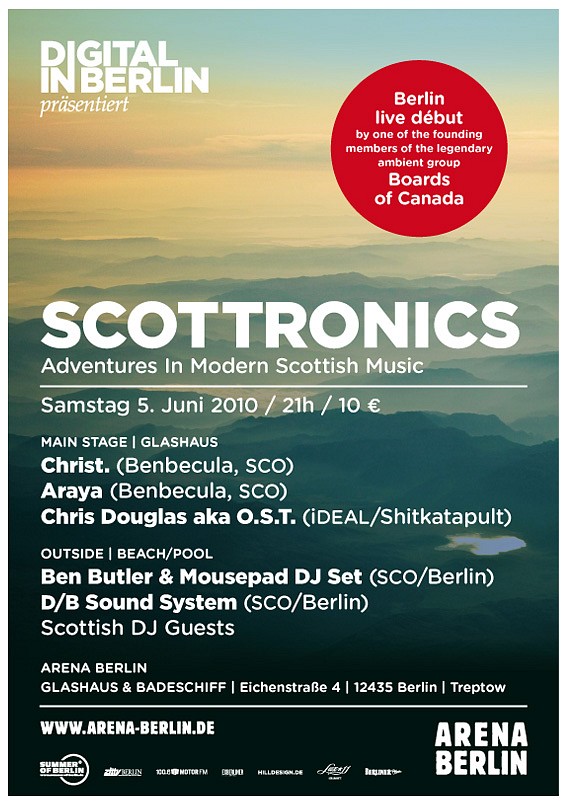