Born in Palu, Indonesia, 1982. Interested in exploring human voice as a medium of creation, and language as a subject to experiment with. Exploring vocal range, textures, and spirituality in Senyawa, and developing a conceptual language-driven project in Zoo. Initiated numerous concept-based projects around voice as the main element. Delivered workshops around the globe that focus on using human voice as a rich resource to explore primal expression and improvisations.

Rully Shabara has recently been announced as a mentor for Forecast’s 2022-23 edition in Berlin. Applications open from 20 January.

1. Voice is your sound. Language is the style.

2. I scream therefore I am.

3. Seeking for God is totally worth it no matter what you end up with.

Black dressed artists lining up in front of a dark looking techno club.

Warmindo; a string of 24 hour cheap food place owned and managed by people from Kuningan, West Java that serves only instant noodles and instant drinks. It’s everywhere. The embodiment of immigrant’s success.

As a performer I cannot really say, there’s so many to name but as a spectator it was Keiji Haino’s in some kind of very small library in Tokyo.

Technology is a inevitable path to cross as someone who explores human voice. It is the trajectory to expand the possibilities, and technology helps to extend it.

I do and he is supportive for sure. 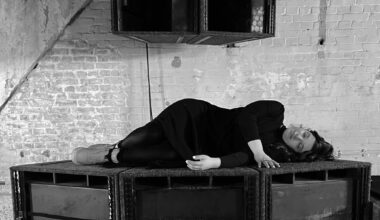