“Myriad II – a concert installation” by internationally renowned composer Rebecca Saunders will be presented as part of the triad series MODULAR MUSIC by singuhr – projekte at Radialsystem. In hourly changing collages six of Saunders’ works are performed by musicians on site as part of the sound installation “Myriad” – by by Marco Blaauw (Trumpet), Nathan Plante (Trumpet), Caleb Salgado (Double Bass), Ernst Surberg (Piano), Chatschatur Kanajan (Violin) and Simon Strasser (Oboe). Each performance day begins with the stand-alone version of the sound installation, followed by collages of concertante forms and installative states.

The interactive sound installation “Myriad” by Rebecca Saunders, which she developed in 2015 together with architect Martin Rein-Cano (Topotek 1), consists of 2,464 music boxes. Arranged in strict symmetry and integrated on both sides into an eight-metre-long backlit wall, they emit 54 short melodies in countless (“myriad”) combinations. The visitors activate the music boxes and thus become co-composers of a collective piece of music. In the collages, the sound installation is expanded through a performative-compositional element.

The triad series MODULAR MUSIC, by singuhr ­– projects, presents works at the intersection of concert, installation, environment and performance. As modular artistic platforms, they are models of new forms of cross-genre music and art productions. “Myriad II – a concert installation” is the second part of the series to be followed by David Tudor’s installation „Rainforest“ later in March. 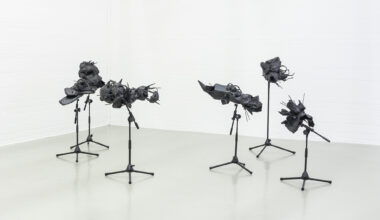