Kai Schumacher delights in pushing the boundaries between classical and popular music while avoiding the wellworn clichés “Crossover.” Boasting an impressive pedigree, Kai studied at the renowned Folkwang University Essen with Prof. Till Engel, passing his „Konzertexamen“ with distinction in 2009. Since then, like a musical mad scientist, he has been constantly experimenting and combining seemingly incompatible elements with surprising results. His solo performances are acts of pure musical – and stylistic – alchemy, serving up heady mixes of Dadaism and Dancefloor, Avantgarde and Pop culture – sometimes all at once!

When not engaged in genre-defying pursuits, Kai Schumacher‘s repertoire focuses on American piano music of the twentieth and twenty-first centuries. His debut recording of Frederic Rzewski‘s monumental “The People United Will Never Be Defeated” (2009) was hailed by Fono Forum magazine as a “pianistic sensation” and voted CD of the month.

On his second album, “Transcriptions” (2012), he bravely turned to the musical heroes of his youth – Rage Against the Machine, Nirvana, Slayer and others – remixing them and transforming the concert grand into a four squaremeter sound monster, a mechanical sound-effects board, complete with prepared percussion. The third album “Insomnia” (2015) is the story of a nocturnal odyssey, at once soothing and disturbing. It ́s five restless “hymns” to the night feature the works of five American composers written over the past 80 years. On his album “Beauty in simplicity“ (2017) Kai Schumacher was combining original piano compositions with his own arrangements for „enhanced piano“ to create a repetitive set between meditation und mania. Including works from three centuries ranging from Erik Satie through Steve Reich to Moderat Minimal Music meets its classical pioneers and descendants in Ambient, Techno and Post-Rock.

1. There is no better series than „Better call Saul“ out there.

2. Happy that 1.FC Kaiserslautern finally made it back to 2. Bundesliga.

As a pianist, I’m very much into Minimal and Contemporary Music. So composers like Steve Reich and Philip Glass, but also John Cage or George Crumb play an important role for my understanding of music. But I’m also influenced by the soundscapes of Post-Rock, Techno and Ambient.

My first musical memory is me running around the living room table and trying to sing along to Brecht’s „Dreigroschenoper“. When I was 5 years old I had my first piano lessons with an old lady who was a friend of my parents. That’s how it all started.

When I was younger my Berlin associations are mostly connected with long nights out and waking up on some friends’ sofa trying to figure out what the hell I’m doing here. I still love the spirit, but now my view of Berlin is, fortunately, a more professional one. Most of my musical partners are living there so my Berlin trips mainly consist of rehearsals, recordings or meetings. Or maybe I’m just getting old.

I´m living in Duisburg, and my favourite place is an old harbour close to my apartment where you can hang and enjoy the summer. Before Covid, there was a great club called „Djäzz“ where I spent lots of nights, but unfortunately, it is closed meanwhile.

When I was a kid I always wanted to be a sports reporter. But actually, I can’t imagine a world without music, because almost everything I’m doing for the last 20 years is somehow connected with it. It would be a very sad world indeed.

I’m currently doing a project with Gisbert zu Knyphausen, we´re re-arranging songs by Franz Schubert which is something I wanted to do for years! But I also would love to do a collaboration one day with some of my favorite electronic musicians, like Efdemin or Rone, just to name two of them.

I’ve been to Kirgistan once to play some concerts and give workshops. One of the shows was on my birthday, it was a lousy grand piano where some keys were literally missing, the pedals didn’t really work and it was detuned like hell. But the hall was so crowded that people had to sit next to me on stage and the audience was so grateful and enthusiastic to hear a piano concert that I’ll never forget this show! And in the end, they were singing „Happy Birthday“ which really brought me to tears.

Not at all! I’m a total technology idiot and happy to get along with my DAW to prepare some midi demos on my computer. I love the old-school process of sitting on the piano and just letting it flow.

11. Please tell us, what the audience can expect from your piece you present at this years Detect Festival?

I’ll mostly play pieces from my last solo album „Rausch“, where I experiment with some piano preparations. It’s gonna be a quite rhythmical set I guess. But I’m currently working on new music, so probably I’ll try out one or two of my new pieces which will be a premiere for me. 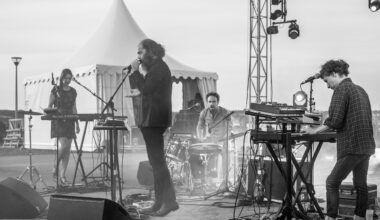 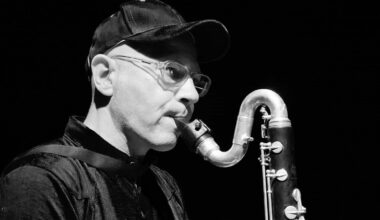