Holland Andrews (they/them) is an American vocalist, composer, and performance artist whose work focuses on the abstraction of operatic and extended-technique voice to build soundscapes encompassing both catharsis and dissonance. Frequently highlighting themes surrounding vulnerability and healing, Andrews arranges music for voice, clarinet, and electronics. Andrews harnesses these instruments’ innate qualities of power and elegance to serve as a cohesive vessel for these themes. As a vocalist, their influences stem from a dynamic range including contemporary opera, theater, and jazz, while also cultivating their own unique vocal style which integrates these influences with language disintegration and vocal distortion. Andrews previously performed solo music under the stage name Like a Villain.

In addition to creating solo work, Andrews develops and performs soundscapes for dance, theater, and film, and their work is still toured nationally and internationally with artists such as Bill T. Jones, Dorothee Munyaneza, Will Rawls, and poet Demian Dinéyazhi. Notable musical collaborations have been with composers and artists such as William Brittelle, Son Lux, Christina Vantzou, Peter Broderick, Methods Body, and more.

Holland will be part of the the 3 day micro-festival Taking Things Apart @ ausland.

1. Jupiter can fit inside of it all of the planets in our solar system.

3. Emotions are an internal guidance system which holds information you can mine for understanding yourself and navigating the world more deeply and freely.

Performance has been my biggest inspiration to continue creating and pursuing music. I was raised by women who had a singing group in the 1970’s, and grew up around a singing family where we would perform in front of each other as a pastime. Performance is a place I go to to feel cathartic freedom, where I can be in a flow state of presence and creation. Over time, I have been able to find a similar state of freedom with deepening my experience in music production since lockdown began in 2020.

I always noticed that nothing makes me feel the way music does. I’m not sure when it began in linear time, so I see it as something that was dormant in my DNA and became activated when I first heard singing, likely the first music I ever heard. I began writing music when I had access to Garageband in high school and started to layer voice with saxophone and field recordings. The microphone I used was just the one built into my 2007 laptop. At 19 I moved to Portland, Oregon and I eventually was asked to play a show because someone liked the music on my Myspace, and then after the show was booked I started to figure out what gear I needed to play live shows, and then how to even use that gear. That was kinda the beginning of everything for me.

Like many, my favourites aren’t fixed in time, so I will list albums that I have been returning to more so recently.

Transformation, the word “serious”, an uncomfortable interaction I had with a security agent at Tegel.

My apartment, which I’ve made a bright and colorful sanctuary I am excited to return to from traveling. Also, Green-Wood Cemetery. It is the quietest place I’ve ever been in Brooklyn.

Become a revolutionary activist/alchemist to create music for the world with no music. Alternatively, learn how to telepathically transmit emotional bliss through vibration using only thought and intention, and this would also allow me to glow different colors visible to the naked eye.

I like collaborating with people who are kind, humble, endlessly curious, like a masterful child who just discovered something exciting and wants to share that with you because it feels beautiful to them. I love it when being creative feels mutually effortless and inspired. Yes, there can be specific individuals who I think I would love to work with, it is just that my main interest is working with people where the experience of collaboration itself is electrifying, in addition to creating work that we are proud of.

One stand out experience was in 2019 at the opening of the T:BA festival in Portland, OR. It was my last performance in Portland where I lived for 11 years before moving to Brooklyn just months before lockdown. It is special for several reasons, including the ensemble of incredibly talented friends playing with me on stage, but in particular because it was night where I discovered that I do not only need to identify as a musician, since I had unconsciously allowed that title’s meaning to be restrictive. I discovered I could do anything I really wanted on stage and that it was all allowed; even if it was acting, dancing, cracking jokes, cartoon making voices, whatever. I was free there. This was a pivotal moment for me.

Since my instruments are monophonic, i.e. voice and clarinet, technology is a necessary part for how I get to compose. My comfort zone has been using loop pedals because of their immediate and available capacity to create chords. Using DAW’S and samplers allow me to pull free from the linear nature of loop pedals and enter another kind of freedom from the rigidity. I’m grateful for how I get to use technology to write, even though I may feel clumsy with it at times.

I will not answer for my sibling, but for my father. One time my dad told me “Ya know, Holland, I may not always understand what you are doing, but I really just love getting to watch you grow.” This feels like how I want to answer this question. 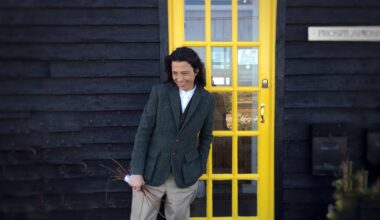 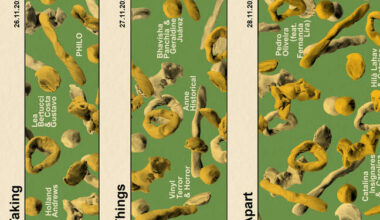