During the Second World War, Greek partisan women fought against the German occupation–equal partners of the male partisans for the first time. After the end of the war, they were not rehabilitated but instead persecuted as communists once again and interned with their children on the islands of Trikeri and Makronissos, amongst others. As a starting point, the music theatre collective FrauVonDa selects diary entries and poetry which were written on the islands: they tell of survival, of the powerful acts, as well as the daily struggle for dignity and pride. The original texts are linked with reports of today’s political activists in Athens.

The original texts, represented by the voice of Winnie Böwe, are linked to reports by contemporary political activists in Athens: as timeless examples of solidarity and uncompromisingness, they mark a visionary, utopian or dystopian interface between history and the present.

As a plea for democracy and participation, the audience becomes increasingly involved as an artistic partner during the performance, taking decisions about various parameters of the performance with increased frequency.

Eleftherios Veniadis’ music consists of composed segments, free improvisations in direct exchange with the audience, and, finally, “comprovisations” which process material sent in advance by the international audience via opencall. At the same time, the online audience acts together with the guests in attendance via an interactive platform: voting results become directly visible here and influence the performance directly. In this way, the viewers at each location are given a voice in the work and, together with the artists, bear responsibility for the course of the performance.

The playful moment of the interactive performance is always juxtaposed with the suffering of women under totalitarian structures – ECHOES OF SILENCE celebrates democracy as the highest political good.

The „comprovisations” have a central importance as an interface between the audience and the performers: they are based on the materials sent by the international audience. 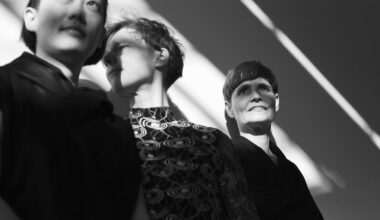