Dave Phillips aka dp re/searches and ponders existences and behaviourisms humanimalistically via audio de/construction, psycho-acoustics and sonic rituals. Sound as communication in direct and primal form, a tool of metaphysics, a conscience, an unrestrained language. Sound as a means to activate primordial shared emotions otherwise hidden by civilised experience.

dp’s work engages, invites existentialist rumination, demands awareness, endorses sentient and environmental e/quality and encourages intervention and responsibility; therapeutical aspects are acknowledged; a form of release is evoked, a liberating cleansing, a sound catharsis opposing the omnipresent reduction of existence, getting in touch with our sentient origins as with the realities of our times. dp rings in the era of humanimal.

Bernd Schurer is a forward-thinking experimental multidisciplinary artist, musician and curator with a background that comes from conceptual art practices, noise, electroacoustic- and radical computer- music. His work discards all formal habits commonly associated to categorisation in favor of personal aesthetic idiosyncrasies.

Particularly involved in the artistic research on psychoacoustics, spatialization and computational algorithmic art, he focuses on perceptual realizations of these phenomenological implications in his works.

Krube. is a sound artist, based in Berlin/Kreuzberg. He is working under the Krube. moniker since 1999.

Hacklander \ Hatam is a drums and computer music duo. Formed spontaneously in Moscow during New Years Eve 2013, the duo’s first piece was WAR SOUNDS for the Ertz Festival #14 in Bera, Spain. Before converging as a duo, they each performed solo: Farahnaz Hatam  performed solo works such as ‘Directions for Decomposition’ and Colin Hacklander, solo works such as ‘Next time, die consciously.’

Farahnaz Hatam is an experimental sound artist and is highly active in the Berlin experimental scenes. As an artist working with digital sound synthesis in SuperCollider, her current work is not only interested in sound as sculptural material, but as the medium in which ideas are communicated. Over 15 years professional work as a molecular biologist, Farahnaz arrived at sound through the visual arts.

Colin M. Hacklander is a self-taught drummer & composer based in Berlin. He has toured extensively worldwide, and has drummed with Capillary Action, The Observatory, fly rich, worked with Scottish composer James Dillon, Senegalese sabar legend Doudou N’diaye Rose, Mark Ernestus’ Jeri-Jeri, toured with Charles Hayward of This Heat, performed with Stephen O’Malley, Shahzad Ismaily and others. 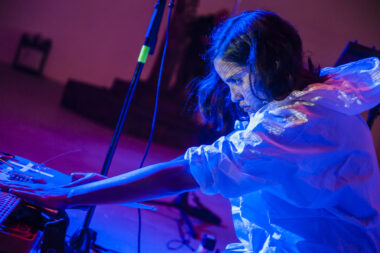 The Heroines of Sound Festival presents pioneers and current heroines of electronic sound: over the course of three…
0 Shares
0
0

SYNESTHESIA is a live graphic score created and interpreted in real-time by Splitter Orchester. In this new concept,…
18 Shares
18
0

On Saturday October 8 we’ll be back at Prenzlauer Berg’s Musikbrauerei for the final Kiezsalon of the year.…
0 Shares
0
0
Back to top
Manage Cookie Consent
We use cookies to optimize our website and our service.
Manage options Manage services Manage vendors Read more about these purposes
View preferences
{title} {title} {title}