Having started BSÍ under the premise of trying instruments they didn’t know how to play, Silla Thorarensen (drums & vocals) and Julius Pollux Rothlaender (bass guitar & toe-synths) understand their band as a playground for simply being who they are.

Two best friends, rumbling and rolling through life, not taking themselves too seriously, struggling with self-doubts and imperfection while trying to see these as empowering virtues, unafraid to just do and be what- or however they feel.

When it comes to their upcoming debut album, the title pretty much states how Silla & Julius have felt during the time of writing and recording it, or more programmatically, what they feel BSÍ has been about so far: ‘Sometimes depressed … but always antifascist’. Directing sorrow and the raw energy of joy and anger to two distinctly different sides, they created an album that might as well be a twin EP, five songs low key heartbreak melancholy, five songs riot grrrl lofi-cute-punk.

BSÍ’s debut album touches equally upon the endless fall, vulnerability and intimacy of loss and leaving – while on the other side celebrating sunny summer days, salty knees and the idea of a feminist world revolution.

1. Iceland is not only the beautiful land of volcanoes, picturesque landscapes, trolls and elves, but also a country of notoriously racist policies regarding refugees – next time you come and visit, make sure to bring some ‘Refugees welcome’ stickers, join us at the next No Borders protest, and send an email to the Icelandic Ministry of Justice (dmr@dmr.is), telling them that you’ll stop visiting Iceland as long as they keep on deporting refugees or sending them to live on the streets, stripping them of their basic human rights.

2. Sea bears can cope with extreme high and low temperatures that would kill other organisms. Some species can survive exposure to -272.15°C.

3. Heartbreak is like a drug withdrawal. Studies have found that the brain reacts to heartbreak much like it does when an addict is withdrawing from substances like cocaine or opiods.

The taste of Brussels sprouts, and the atmosphere of the greyest and dullest building in all Reykjavík – the infamous BSÍ bus terminal.

Too late, but just in time for finishing our debut album with BSÍ!

Schaltraum, Thomas & Tomatenplatten, the recordings for the ‘…but always antifascist’ half of our record, banana Juice & champagne at some random dive bar, Neukölln, Schokoladen, SO36.

BSÍ, when in need for melancholic inspiration, and our studio Vesturbæjar Beach for feel-good and happy vibes.

After a few shows in basements in Reykjavík, our fourth concert ever was in Berlin at SO36, where we played as support for Beatsteaks. We were veeery nervous, most of our songs half-finished and not really having a clue how we ended up there, but we managed to survive and we hope to get to do that again one day.

We don’t know! These answers are handwritten, and will be delivered to your office by a carrier pigeon, flying over all the way from Iceland to Berlin.

We combine for eleven siblings in total! They’re always so supportive, and that would be the same with whatever we’d chose to spend our time with, no matter if we were musicians, construction workers, birdwatchers or unemployed. Family! 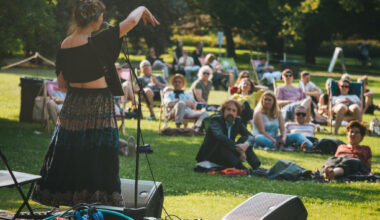 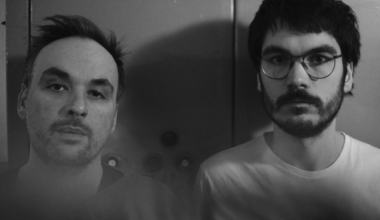