The Invisible Comes to Us is a new album from the pioneering partnership of Anna & Elizabeth. Released on the significant Smithsonian Folkways Recordings, the record is a spellbinding reconfiguration of ancient folk ballads that sees the duo’s immersion in Appalachian music move to a place of boundless experimentation.

They combine two powerful and very distinct voices. Elizabeth LaPrelle was raised in rural Virginia and is frequently lauded as the finest traditional singer of her generation. Anna Roberts-Gevalt is a multi-instrumentalist whose musical curiosity has taken her from old time fiddling in Kentucky to a more recent immersion in Brooklyn’s avant-garde community. Together they find new ways to tell old stories of love, loss and intrigue, while relishing the tension that arises between their very different backgrounds and orthodoxies; holding firm to the roots of the music while removing the limits of how that music can be played and presented.

Many of the ideas for the record were stitched together during artist residencies that Anna and Elizabeth undertook following a year of song collecting. The result is a record where the sounds themselves are integral to the retelling of these tales, alongside the sometimes cryptic and complex narratives of the sung and spoken words.

“These are songs we first heard in small archives in our home states, Vermont and Virginia,” the duo write in the sleeve notes to the album. “Recordings made in living rooms and kitchens, of songs learned in childhood. The characters, and the landscapes they occupied, grew rich in our minds. This record grew out of the desire to show you the world we saw in these songs.”

Portland, Oregon resident Mary Sutton’s solo project Saloli threads together complementary shades of soft-hued hypnosis, dazed modal introspection, icy amusement park reverie, and lunar lullaby into prismatic suites of contemplative melody and synthetic communion. Her songs are active rather than ambient yet their structure is more suggestive than scripted, full of lulls, asymmetries, and daydreams. She writes her pieces specifically to be played live on analog synthesizer, with no overdubs or post-production wizardry. The sound of Saloli is one of warm-blooded wiring, turned on and tapped into, emotive and electric, storied machines speaking through all too human hands. 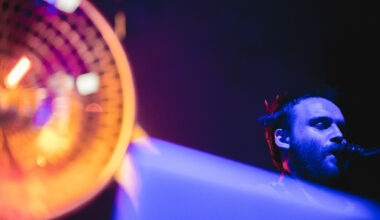