Akiko Ahrendt was born in Rüsselsheim and now lives in Cologne, Germany. Akiko’s music focuses on uncommon live settings with sound in collective processes as well as in solo projects. Akiko has featured as performer and violinist in groups such as radikaltranslation, orange gruppe, Rundfunk-TanzOrchesterEhrenfeld, ensemble garage and Contrechamps. Mostly on the violin, Akiko creates improvisational and interpretive compositions/compilations with recorded material (speaking humans, environment sounds) as well as found material (music and other sounds from the internet). Akiko is also involved in installations and performances involving body, voice, instruments and machines. From 2001-2007 Akiko studied in Berlin, Hannover, Budapest and Frankfurt in violin, contemporary music and philosophy and between 2016-2020, postgraduate studies in media arts at the KHM, Cologne.

1. What is the biggest inspiration for your music?
Listening to what surrounds me
Listening to me and my body
Responding on each

3. What are 5 of your favourite albums of all time?
There are a lot more but here comes the first that come to my mind:
Sgt. Pepper’s Lonely Hearts Club Band (the one with Strawberry Fields Forever and Penny Lane on it!)
Christina Kubisch – Night Flights
The Sugar Cubes – Life’s Too Good
Simon Rummel – Vorsicht Glas! (unfortunately not for sale)
Isabelle Faust – Bach Partitas and Sonatas for violin solo
(a 6th one if i may: Schubert Winterreise with Ian Bostridge)

5. What’s your favourite place in your town?
My town is Köln, so here it is the lake Liblarer See, on the forest side.

6. If there was no music in the world, what would you do instead?
Difficult to imagine, but well… everything that I do right now besides music: farming, politics, performing (without music?)

7. What was the last record/music you bought?
Franziska Windisch – Charcoal Circles.

8. Who would you most like to collaborate with?
Musician: Hermeto Pascoal,
Performance: Xavier le Roy

9. What was your best gig (as performer or spectator)?
As performer: an impro gig in Moscow with Peter Evans (trp), Elisabeth Coudoux (vc) and Florian Zwißler (analogue synth).
As a spectator: Xavier Le Roy, Temporary Title and Tino Seghal’s works in the Gropius Bau (2015)

10. How important is technology to your creative process?
For me: less and less. I like it analogue and I like to move my body to produce art. Thus we have to be aware that technology is becoming more and more used by all humans all over the world and technology can also use and misuse us. And well, for documenting it helps to have technology.

11. Do you have siblings and how do they feel about your career/art?
Yes, three siblings. It changes between mostly being supportive, sometimes being jealous (I guess) and very rarely kind of admiring. 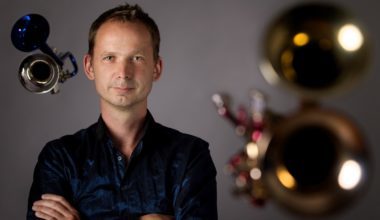