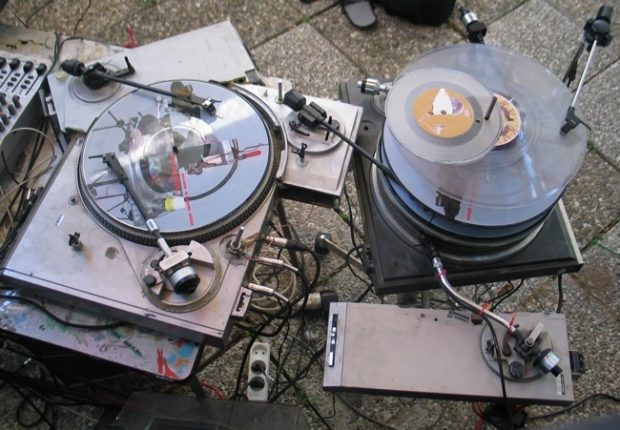 VINYL -TERROR & -HORROR is a collaboration between Camilla Sørensen and Greta Christensen. Their approach to music starts from a visual and sculptural practice. Turntable deconstruction and rearrangement of the vinyl media in all imaginative ways strongly influence their sounds. They work in the field of cinematic soundscapes with a high tolerance of possible hi-fi disasters. Sentimental, heartbreaking sequences where the opera singer is looping and the birds are singing backwards . . . until the breakdown of needles and chaos take over. Cut up and mistreated records looping and creaking from dust and sloppy treatment. Pick-ups being pushed disrespectfully over grooves. Records spinning backwards and forwards while played from multiple pick-ups simultaniously. Meanwhile the lady in stilettoes just keeps on walking down the stairs. Repetitive arrangements, dark sounds, neck-breaking mixes, film-amateur sound effects, scratches, quirks, vinyls, terror, and horror.

The hours of obsessive experimentation with raw sound (both acoustic and electronic, meticulously arranged and fortuitously captured) that rrill bell has dubbed to countless compact cassette tapes over the course of nearly two decades serve as the underlying otherworld behind the contingent worldly manifestations of his performances and installations. His freeform, improvised sets combine chance practices and new skillz in a deep, essentially duo-like dialogue with the tightly wound material as continually re-examined from different angles. Using a custom-made kit composed of cast-off relics of the Tape Age (foremost among them his trusty modified Fostex analogue multi-tracker) and surrounded by piles of said cassettes, he assembles complex abstract emotive tone poems on the fly, one re-contextualised fragment at a time, drawing from the formative inspirations of radical scratch culture, Cagean thought, early tape music, musique concrete, and various strains of free music practice.