As a release concert for the brand new album “Grooves From Another Galaxy” Sound 8 Orchestra comes to Acud this April for another blast of cosmic retro-futurism.

The Sound 8 Orchestra is back! After touring half of Europe the third album from multi-instrumentalist Matthias Wyder entitled “Grooves From Another Galaxy” is finally here and was well worth the wait! The exile Swiss and Berliner-by-choice Wyder is skilfully fusing easy listening, low budget lounge music, retro-futuristic B-movie soundtracks und psychedelic electro sounds to create a sound that is somewhere between Lee Perry, Add N To X, Sun Ra und James Bond Soundtracks.

The grooves of this sound galaxy will definitely make you move. Drummer Rudi Fischerlehner, who will complete the Orchestra at the Record-Release-Show at Acud Club, will also see to that. Both musicians will be accompanied by a synchronised backdrop of found-footage films projected from three Super 8 projectors. An outstanding audio visual experience not to be missed! 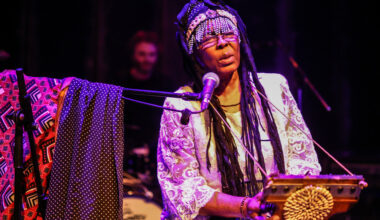