The Sophiensæle was founded in 1996 by Sasha Waltz and Jochen Sandig, along with Jo Fabian und Dirk Cieslak (Lubricat), in the former building of the craftsman’s association of Sophienstraße 18. Its opening production “Allee der Kosmonauten” (Boulevard of the Cosmonauts) by Sasha Waltz & Guests was invited to the festival Theatertreffen in 1997 and quickly generated public interest in the new theatre.

Today, the Sophiensæle is one of the most important locations for German-speaking independent theatre-production. Artists from Berlin, as well as the national and international theatre-scene are invited to produce and present their works here. They are selected on the basis of their artistic concepts, contents, and working schemes.

The Sophiensæle is located in the former building of the craftsman’s association, whose turbulent history begins with its construction in 1904/1905. It was built in one of the oldest streets of the Berlin-Mitte: the over 300-year-old Sophienstraße. 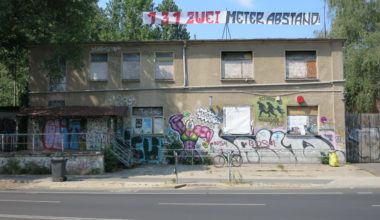