Sara Glojnarić (Zagreb, Croatia) is a composer whose artistic practice is dealing with pop culture, its aesthetics and socio-political consequences, nostalgia and collective memory, as well as the vast network of pop cultural data and their byproducts arising through their juxtaposition.

She is the recipient of numerous international prizes, competitions and artistic residencies, most notably the Erste Bank Kompositionspreis Wien, the Kranichsteiner Musikpreis at the Darmstädter Ferienkurse 2018, the Ivo Vuljević Prize 2019 of the Jeunesse Musicales Croatie, the composition competition NEUE SZENEN V of the Deutsche Oper Berlin and the artistic residency Progetto Positano in collaboration with Ernst von Siemens Musikstiftung and ensemble mosaik.

In the upcoming 2022/23 concert season, her works will be premiered by RSO Wien and Marin Alsop, Klangforum Wien, Ensemble Recherche, ensemble mosaik, Quatour Diotima and the Münchener Kammerorchester.”

Her works are published by Edition Juliane Klein.

3. walks a few extra blocks to get that good oatmilk cortado

Pop-culture, with all of it’s nostalgia, (sometimes) trashiness, queerness and honesty.

I come from a family of musicians, so music was always very present. I grew up on a steady
diet of jazz, funk, rap, rock and classical music, which totally influenced how I think about music today.
I started playing piano at the age of 6 and wrote my first little pieces when I was 10-ish.

I would be a skipper, an athlete or anything food related tbh. Probably a chef or I would own a repair shop/cafe restoring old espresso machines.

Little Simz – Sometimes I Might Be introvert and it turned out to be one of the best things I have ever listened to.

Dream collab would be with Bon Iver, who I have insane musical respect for.
Christine Sun Kim’s critical transcriptions are fantastic and I would totally love to have some sort of artistic exchange with them.

There were many, but the premiere of sugarcoating 2 at ECLAT Festival Stuttgart was a special one. Trio Catch did an incredible job and the gig pretty much launched my career.
Also, performing in “ok, boomer” by Golschan Ahmad Haschemi & Banafshe Hourmazdi was one of the coolest performing experiences I had in a while.

Super important, I love it and use it all the time as a tool and as a creative platform.

I have cousins who are proud of me but not necessarily enjoy the type of music I write. 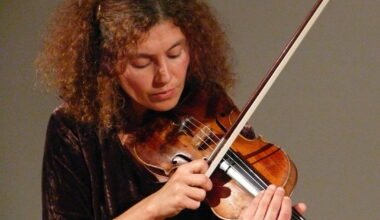