Peter Gregson (b.1987) is a renowned Composer, Cellist, and Deutsche Grammophon recording artist set to release his fifth studio album ‘Patina’ on September 10th 2021. His music is regularly sought out by the most exciting choreographers and dance companies in the world, recently including Theaterhaus Stuttgart / Gauthier Dance, Joffrey Ballet, PA Ballet, Dutch National Ballet, and Ballet BC. Amongst his film credits, Roger Michell’s ‘Blackbird’ (starring Kate Winslet and Susan Sarandon) and the late Alan Rickman’s ‘A Little Chaos’ as well as the Soundtrack for the popular video game ‘Boundless’ receiving critical acclaim.

His music has featured on some of the most popular TV series – from Netflix’s hit ‘Bridgeton’ to HBO’s ‘The New Pope’ by Paolo Sorrentino. Brands including Balenciaga, Burberry, Dior, Ralph Lauren, Pat McGrath have all featured Gregson’s music in recent campaigns and runway shows.

As a cellist, he has performed all around world, from The Royal Albert Hall in London to a jazz club in Beijing; from the Elbphilharmonie in Hamburg to Capitol Studios in Hollywood, which was filmed and released in January 2021. He is a prolific artist, most recently releasing the stunning ‘Somina’ which was commissioned for ‘World Sleep Day’.

I started playing the cello when I was 4 and started writing my own music when I was maybe 13? I was inspired by a teacher on a cello course – I was curious about electronics and augmenting the possibilities of the cello, but there wasn’t much music for cello and electronics that I could find. He told me that if there was music I wanted to hear that didn’t exist, then I should go away and write it. So I started, and haven’t stopped!

I acknowledge it’s a confusing list… it’s not really in any order other than how they popped into my head, but I feel each of these albums has inspired me – The Beatles for their curiosity and creativity in the studio but not so as to overwhelm the music; Bon Iver is my absolute favourite songwriter, this album was a major eye/ear opener for me; Vikingur’s Bach record will stand up in time as one of the most exciting and perfect recordings of this eternal music; Apparat is a genius and this was the first record of his that I heard and I still find things in there that amaze me; Kanye West’s production is off the chart, and there’s so much to find in this record.

I think the common thread here is none of these artists are “surface”. Each listen unravels more, which fuels further discovery and more depth to the music. That, for me, is what a good album should do.

Great people in a great city, great beer, and lots of creativity.

I end up spending most of my time around Friedrichshain – Kreuzberg, there’s a brilliant pub I was introduced to called Hops and Barley, that’s a good place.

The cello is a finely tuned piece of technology! In that respect, it’s essential! But if you’re meaning computers, then yes they’re important too… I have an extensive collection of analogue reverbs and synthesisers, but if I could only choose one synth, it would be my Juno 60 and one reverb would be my Eventide H9000, which is cheating really as it is a multi-channel multi-FX unit, but it’s just fabulous. I find these pieces so inspiring for discovery, and like any instrument, once you learn how to use them, you can truly create sounds and textures that can’t be done in any other way. I think that’s what I look for in any new addition to my studio – does it do something I can’t do in any other way?

I have a brother, he’s a professional guitarist! More to the point, I have two young children, and my 2yr old isn’t sure about my music, but our 3 month old seems to smile when he hears it so I’ll take that as a compliment. 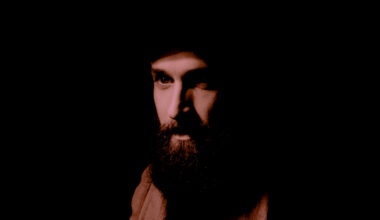 James Osterlund
Back to top