In a perfect world, Japanese composer Midori Takada and her works for percussion would be as revered and renowned as that of Steve Reich. Much like that world-renowned American composer, Takada drew influence from a study of African drumming and Asian music, and surmised how these sensibilities dovetailed with that of minimalism, serving as means to break with the Western classical tradition (she originally was a percussionist in the Berlin RIAS Symphonie Orchestra at the Berlin Philharmonic).

But with only a handful of works to her name and all of it long out of print—be it with her groundbreaking percussion trio Mkwaju Ensemble, the group Ton-Klami or the three solo albums she released across nearly two decades—her music has been impossible to hear since the early 1990s.

Takada’s ideas on ambient music are intriguing; much of it, she says, is calming and soothing when it could be more reflective of nature and society. “As environmental music, it had a capacity and purpose to contribute positively to society,” she says. “I listened to Brian Eno’s Music For Airports. I remember thinking it to be a new sensibility that was being honed in an urban environment. And furthermore, a feeling of solitude as well.”

Takada is a deep thinker on sound, and some of her sonic explanations verge on the mystical. “Everything that exists on this earth has a sound,” she says. “Even if humans don’t call it an instrument, on this earth, there exists a significant vibrancy.”

Digital in Berlin is happy to present Takada’s performance as part of the HAU-theatre’s festival “The Mole Keeps on Digging. Animals / Politics / Performance” in Berlin where she played her first show in 1978. 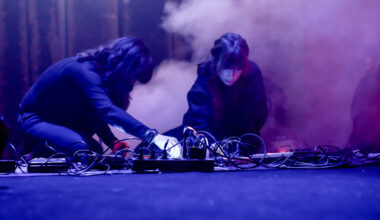