How do spaces influence the way we think, act and experience? What do spaces offer? What do they allow, demand or prevent? How do we shape the spaces that surround us, and how does what happens in and to them alter them? The festival LABOR SONOR : TRANSLATING SPACES examines the agency of space in current experimental music and sonic art.

The Berlin – based concert series Labor Sonor, founded in 2000, is one of the essential platforms for Echtzeitmusik (“real – time music”) – Berlin’s notable experimental music scene, including free improvisation, contemporary composition, musical performance, trash – pop, noise, sonic art and electronica. After the successful festivals LABOR SONOR : TRANSLATING MUSIC, LABOR SONOR : MOVING MUSIC and LABOR SONOR : CHOREOGRAPHING SOUND, each featuring sold – out evenings and broad media resonance, Labor Sonor, the “scene’s research authority” (nmz), initiates another series of artistic experiments. This time, the focus is on spatial concepts ranging between real, imaginary and virtual space, between architectural, auditive and performative space, between natural, built and experienced space and between public and private space – in all their material power and symbolic meaning.

The audience can experience one work simultaneously or consecutively in different situations and spaces. Some artists explore the differences between spaces by moving between performance venues, others stage alteration within the same place: venues include one of Schinkel’s Berlin churches, a repurposed basement of a former squat, a former assembly room and ballroom, a landmark villa, a closed cemetery, and the convenience store around the corner.

As always, the festival is accompanied by a symposium enabling a dialogue between artists, scholars and audience. Artists introduce their concepts of space, reporting on their creative process. Researchers who have accompanied and documented the creation of these works in the run – up to the festival offer insights into the workshops of contemporary sonic art and music. A forum for exchanging experiences regarding the potency of space. 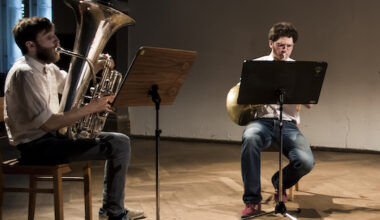 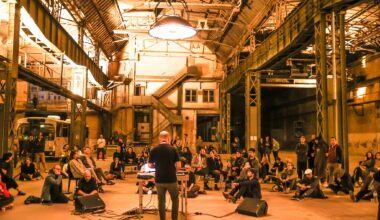