ensemble mosaik celebrates its 25th anniversary with the five-part project series “Klanggutkatalog”. The fifth and last concert of the Klanggutkatalog takes up our concert series “Autonomous Music”, which reflects the role of the performer in the ensemble.

In the compositions by Francesca Verunelli and Andreas Dohmen (UA) the musicians act as part of the common sound body “ensemble”. In the collage “murmurs” by Rebecca Saunders, the musicians perform from positions distributed throughout the space and shape their fragile solos or duos into a sensitive sound architecture that surrounds the audience.

The artistic work of ensemble mosaik builds on the continuity of its musical community, on explorative creativity, networking, collaborations with artists of all disciplines, other ensembles and with event organisers, on intercultural exchange as a reflection and inspiration of global artistic concerns.

Since its founding in 1997, ensemble mosaik has developed into a particularly versatile and experimental ensemble for contemporary music. Its members are distinguished by their instrumental skills as well as their creative individuality. In many years of collaboration, they have created a distinguished ensemble that demands the highest artistic level and intends to be open to the most diverse concepts of contemporary music.

The Klanggutkatalog is a series of concerts by ensemble mosaik, funded by the Hauptstadtkulturfonds. The commissions are funded by the Ernst von Siemens Music Foundation. 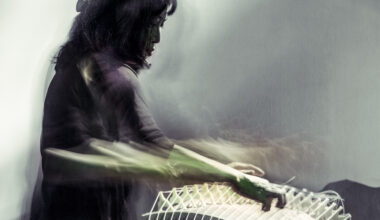