Kat Frankie is a time traveller. Not in a nostalgic, romanticized sense, nor with regard to her sound; her movement between past and present is not an aesthetic thing. It’s more the grandeur of her perspective: Kat Frankie traces the loose ends of history and follows them into the present, uses them to decisively illuminate the political turmoil of our days, understands the connections, the ever-renewing catastrophes – and thus directs her knowing gaze towards the future.

What arises from these ruminations, she translates into text and music. Time travel more as poetry, then. Or: a visitation. In this regard, her new album is also the work of an evolved observer, an empathetic thinker, a fierce narrator. But above all: a great songwriter. The 43 year-old seems to look down upon time in her craft, directing her concerned gaze towards human interrelations.

1. The largest animal on earth is the blue whale which is on average 24 metres long.

2. Abuse of power comes as no surprise.

3. It snows in Australia.

Little seeds of emotion; they feel like knots that I need to unravel. Songwriting is my way of processing the world, events, behaviour.

I’ve always sung. When I was a child I was always making up songs. I think there is just something in the muscles in my body that makes me want to sing. I don’t think I ever got into music, it was just always there.

All time? That’s quite a commitment. Some albums I’ve enjoyed lately are Olicía’s Liquid Lines, Kenichi & the Sun’s White Fire and Albertine Sarges’ The Sticky Fingers.

Tension between the underground/backroom/alternative-space indie music scene and the moneyed creatives gentrifying and re-shaping the city in the image of instagram.

I studied design, so I’d build chairs or design lighting. The process of creating objects or spaces is really not so different to music. Although noone claps at the end.

I bought my friend Albertine Sarges’ record at her record-release show.

I recently finished a soundtrack for an upcoming German film. It was such a fun process and I got to make a lot of noise-y, grungy synth stuff which is not what I’m known for. I’d love to collaborate with more film directors in the future.

As a perfomer: my acappella show B O D I E S at a sold out Elbphilharmonie, just a few weeks before Covid hit. Just myself and 7 other singers on stage, filling that space with only our voices. It was incredible and wonderful and dream-like.

Very important. I’m usually demo-ing at the same time I’m writing, testing what works and what doesn’t. A lot of the initial ideas I record end up on the albums in one form or another.

They’re very supportive, although I don’t think they like my music that much! 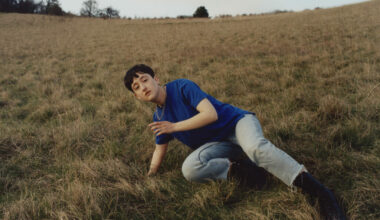