The Berlin trio Jane in Ether, founded in early 2019, is comprised of recorder player Miako Klein, pianist Magda Mayas and violinist Biliana Voutchkova. The three musicians are internationally renowned for their live shows and numerous recorded works in the fields of improvisation, contemporary music, and performance. Originating from independent musical backgrounds, genres, and styles, the trio concentrates on developing real time compositions exploring the dynamic and tonal possibilities of their respective instruments using uniquely unconventional extended techniques. The primary focus of the group resides in the variety of timbres that arise from the combination of instruments as they overlap or coexist side by side, on patiently creating fragile textures which hover on the edge of audibility only to spontaneously shift direction creating a dynamic space for dense clusters of noise or the sonic suspension of minimal tonal soundscapes.

Silvia Tarozzi & Deborah Walker: Canti di guerra, di lavoro e d’amore (songs of war, work and love) – A contemporary re-interpretation of female folksongs of northern Italy „We have been working for several years on transcriptions and reinterpretations of traditional folksongs from our birthplace, the Emilia-Romagna region in Italy.

These songs come from the first decades of the 20th century and from the period of the Second World War but some of them have older roots. The melodies and especially the lyrics have been transformed over time through oral transmission and adapted to different social, working and historical contexts. One of the strongest influences of our project is the repertory of choirs of female rice-field workers, the “Mondine”, with their typical polyphony and powerful singing. Women working and living in community during the months of the rice cleanse learn, develop and share a vast and varied repertoire of songs; the most beautiful voice is naturally elected as a soloist and all the others are the chorus. The timbre of voice is the right one for open spaces: a call, a full-bodied voice. The songs are the popular ones of the time, which everyone knows, but new stanzas and new melodies are also created and an original repertoire is born. In our music, the songs emerge through sounds far from tradition, rooted in contemporary musical experimentation, alternating dissonances with melodic impulses, bruitisms with draperies of impalpable harmonic sounds. 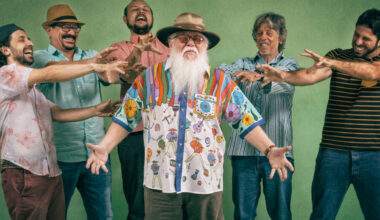