The experience of the pandemic, of a hermetically sealed society, is met head on by the artists with a view toward the open world, taking up topics of censorship/oppression as in Ying Wang’s »DIS-A«, contemplating isolation and communication in a ritualistic performance as in Liping Ting’s »OOO-Intime«, or as in Laurie Schwartz’s »Outtakes from the Dangerous Women Files«, shedding light on historically marginalized protagonists of culture and politics, challenging existing norms.

In the piece »DIS-A« for ensemble and video, the composer Ying Wang addresses the disappearance of dissident critics, artists, and journalists under authoritarian regimes. This is realized musically through filtering and a dramatic polyphonic process in which musical material is continuously reduced through the removal of the main theme. Initially, many secondary themes and accompanying voices resist until only »black« noise remains and the »disappearance« is complete. This is not a calm or quiet process, with the music emerging in a constant struggle with its erasure, and the polyphony of the ensemble and solo instruments alike lashing out against it.

Performance artist and musician Liping Ting takes the pandemic as a starting point to reflect on how people communicate with each other, with the world, as well as with nature. In the hybrid performance of »OOO – Intime«, she creates an interplay between the livestream of her performance in Taiwan and the live situation of the ensemble on stage. The open score with instructions on playing techniques, dynamics, intensities and also physical movements of musicians interwines with flow of the hybrid performance and unfolds a complex sonic environment.

Laurie Schwartz’ »Outtakes from the Dangerous Women Files« is an ongoing series that mashes up threads of art, culture and politics of the past with the present, as contemplated through the prism of historically notable women. In her brand-new »#2 the deeds« Laurie Schwartz reflects upon the dramatic gesture of Emily Davison, a militant suffragist. The works explore counterpoint between sound, gesture and documentary images to create a mesh of references that jump across time and place. 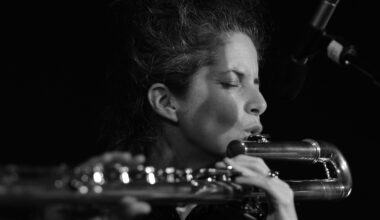