Visitors to the exhibition Sentiments, Signes, Passions can travel inside Jean-Luc Godard’s film and walk through it like a forest. Le livre d’image emerges in space through 40 monitors and 20 loudspeakers. The exhibition is being shown for the first time in Germany at HKW.

Jean-Luc Godard’s film Le livre d’image (2018, coproduced by ARTE) is a political film poem. The filmmaker has combined images from film and contemporary history into an associative collage in five chapters and an epilogue: A mushroom cloud, IS flags, images of flight, expulsion, executions and war, but also of film history legends and sunsets in Tunis. The film takes a critical look at the twentieth century and questions the production of images, art, war, religion, representation and law.

Sentiments, Signes, Passions unfurls Godard’s film in space. The exhibition was curated by Fabrice Aragno, cinematographer and producer of Le livre d’image, in collaboration with Jean-Luc Godard. It takes up the division of the film into chapters, fragments its parts and breaks with its linear form. The audience can give free rein to their own associations and experience the film through twenty loudspeakers and forty flat-screen televisions of various sizes and years. In the space, they enter into dialogue with each other. Detached from the temporal and formal conditions of a film screening, viewers weave their own resonances from hundreds of fragments – and experience the film as a “projection vivante.”

Following the presentation of the exhibition in June 2020 at the Visions du Réel festival in Nyon, it is now on view in Germany for the first time. 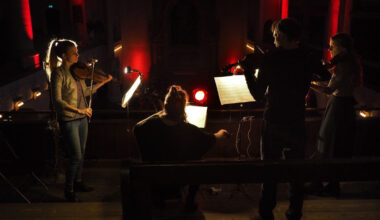