Their new album release in spring 2016 with the title ‘The Wilderness’ explore “the infinite unknown, utilizing several of the band’s own definitions of “space” (outer space, mental space, physical geography of space) as compositional tools.”

The band quickly gained a reputation for their live shows even amongst other established local bands such as Lift To Experience. They also garnered a small amount of media attention as a result of their second album Those Who Tell the Truth Shall Die, Those Who Tell the Truth Shall Live Forever, due to rumors linking it to the September 11, 2001 terrorist attacks – The album was released in late August 2001, with liner notes containing a picture of an airplane and the text “This Plane Will Crash Tomorrow”.

“The Earth Is Not A Cold Dead Place” is their third full-length album (counting “How Strange, Innocence” as their debut, see below). It shows the band has developed their characteristic sound to its full potential and the album has been critically acclaimed.

Friday Night Lights, the football movie based on the book of the same name, featured a soundtrack consisting mostly of songs by Explosions in the Sky, both original (as found on the Friday Night Lights soundtrack ) and from earlier releases. They are also frequently played in the TV-series sharing the name. They have also contributed to the soundtrack of Al Pacino’s latest movie, Manglehorn, directed by David Gordon Green.

21: The Rescue, an experimental work for which the band sat down for eight days creating a song for each. The clapping and finger snapping on “Day Eight” is a good example of a harmonic restructuring of their old sound.

How Strange, Innocence, the band’s debut album, was finally remastered and re-released, making it accessible to a much larger audience. The first pressing consisted of only 300 CD-Rs that the band would later regret handing out as they felt the work to be naive, musically simple and not up to their standards. They have since learned to love, as well as hate, their debut as a showcase of their emotional range and emerging talent.

This event is presented by Digital in Berlin.

Explosions in the sky 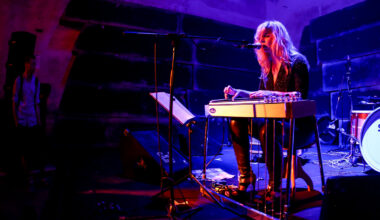 Bristol based group, Tara Clerkin Trio, is made up of Tara Clerkin and brothers Pat Benjamin and Sunny…
1 Shares
1
0
Back to top
Manage Cookie Consent
We use cookies to optimize our website and our service.
Manage options Manage services Manage vendors Read more about these purposes
View preferences
{title} {title} {title}
×