Dylan Henner says that “The Invention of The Human” is designed as a response to the question “what makes us human?”. The question has become increasingly important in this period of history, in that many of the answers aren’t good enough. “Civilization” could be one answer; but what good is civilization where there is so much misery within it? “Progress” could be another; but what good is progress without kindness and empathy to sustain it? Taking the thought of man’s relationship with technology as a measure of humanity. He asked the computer “what do you think a human sounds like?”, and with that he built this album of synthesized vocals, wondering if technological development can help explain what we are.

2: I share my birthday with Prince Philip and Kate Upton. My personality is somewhere between these two people.

3: I am currently reading Cosmos by Carl Sagan and I have loved every page of it so far.

Right now, it’s the architecture of the natural world. The sounds and stillnesses of nature. Sitting in silence and listening to the world; listening to tiny moments of sound placed about a space. Sounds like birdsong, flowing water, wind through leaves. I like to combine that inspiration with my love of early minimalism and choral music and tell stories that express a meaningful truth about existence.

2. How and when did you get into making music?
My mother sings in a choir. When I was a boy I used to listen to her rehearsals, and while I found it deadly boring as a kid, I think it instilled in me a deep love of choral music. I think I was probably destined to be a musician because of that influence. I started making solo music for field recordings and synthesis in 2018, and released my first EP A Reason for Living in February 2019.

4. What do you associate with Berlin?
High quality Turkish food. Good parties. Ableton. Cold apartments. A school trip when I was a teenager and my history teacher convinced he had found Hitler’s grave. Everyone moving there. Summer days in Templehof.

5. What’s your favourite place in your town?
I live by the sea. I need to be near the sea. The air feels stale to me inland. I can spend a lot of time watching the sea.

6. If there was no music in the world, what would you do instead?
I can’t imagine such a world. Everything is music for me. Patterns of speech, interconnected rhythms of human and natural life, the sounds of the breath and the heartbeat, the sounds of the weather. I think I would be forever trapped in an everlasting song that would never be recorded.

7. What was the last record/music you bought?
An order from Boomkat:
Etrusca 3D – s/t
Various Artists – This is Cairo Not The Screamers
DJ Plead – Relentless Trills
Various Artists – If I Had a Pair of Wings Vol. 3
Avalon Emerson – Rotting Hills

8. Who would you most like to collaborate with?
Brian Eno, Ryuichi Sakamoto, David Byrne, Mike Patton, Sonny Rollins

9. What was your best gig (as performer or spectator)?
I’ve only ever played one show as a performer (so far!), but I hope there will be more to come. One of the best shows I’ve ever attended was Melt-Banana in Brighton in 2019. A brilliant and joyous explosion of noise.

11. Do you have siblings and how do they feel about your career/art?
I have a younger sister. She, I think, is indifferent to the music itself, but supportive of my desire to do it.

Boomkat.com about his latest release “The Invention of the Human”:

Henner has mentioned the influence of “Akira” OST composers Geinoh Yamashirogumi, and we hear new age deity Hiroshi Yoshimura’s blissful restraint in there too. It shouldn’t be much of a surprise – Henner’s last records were influenced by gamelan and travels in Sri Lanka and Vietnam, and his pacing here certainly speaks to those same roots. Yet there’s also elements of Oneohtrix Point Never and even James Ferraro as Henner manipulates synthesized vocals to fit his vision. 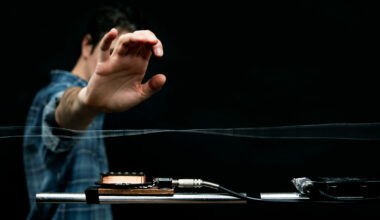