Charo Calvo is a Spanish electro-acoustic composer, sound designer and teacher, living in Brussels. After having performed as a dancer with the influential Belgian dance company Ultima Vez, she started her studies on electro-acoustic composition in 1992 with Annette Vande Gorne at Brussels Conservatory (now ARTS2 Mons), where she graduated in 1999. From 1992 her work as composer is being developed through different media, widely diffused on international venues and festivals, dance performances, theatre, film and radio.

2. I am very grateful to all the persons who imagine and develop solutions to the world’s problems, especially those who have the needed knowledge and are not looking for profit.

3. Getting older is getting wiser.

Everything out there, from people and animals to stones and stars, from books to trains and storms, from sounds and smells to science and technology. The complexity of the world we live in.

My mother often sang at home. We lived in a quiet little house on the outskirts of Madrid. There was no running water in summer, no television and no fridge for the first 10 years of my life. I remember playing a game with my mother in the kitchen in winter. The tap was always leaking and she had placed a small porcelain vase to catch the water drips that would otherwise be wasted. I would hide my head in her lap and try to guess when the next drop would fall into the vase with a beautiful ‘plop’. I was never right, impossible to time the end of the silence, it was a pure chaotic behavior as I came to learn later. I believe that cozy game had a big influence on my music making. I have to mention also primary school, we memorized a lot of songs to learn English or even maths, and had many performances with the girls’ choir directed by a passionate and talented Basque nun. Years later, a girlfriend and I started a punk duo, she wrote the lyrics and I wrote the music with a Casiotone. My years as a dancer helped me to link music to movement and space, what it is also a main theme in my music. For long time I kept doing vocal experiments with a four-track cassette until I entered the Brussels Conservatory to study electro-acoustic composition, finally acquiring the language skills I was longing for.

– The kick inside by Kate Bush. Felt like I knew that woman.

– Todo es de color by Lole y Manuel. One of the first albums to break the traditional rules of Flamenco in the 70s.

– Secrets of the Beehive, David Sylvian and Ryuichi Sakamoto. The electronic touch and the elegance of Japanese haikus.

– Mantra by Stockhausen with Alfons and Aloys Kontarsky and the composer at the Ring Modulator. Eyeopener!.

The lime trees in bloom at the end of June, the city smells wonderful, they are everywhere.

Huidevetterskaai in Ghent. A small street along the river Leie. The river flows in an east-west direction, so that the sun shines over the water all day long, from dawn to dusk, reflecting in the moving mirror. Never the same river twice.

Motomami by Rosalia. I have all her albums, expecting the next one.

If I have to be a bit realistic, I would say with Valerio Tricoli.

And hopefully with Tilda Swinton, I dream of her voice sounding in my next radio play. I met her during the filming of Luca Guadagnino’s ‘Suspiria’. I had a very small role as an old dancer-witch and I enjoyed her warm and generous presence on set or crossing her on the corridors of the hotel. Her voice is as changeable as her appearance, pure magic.

My best gig as performer was the concert at Reflux Festival on 16 September 2022 at Zwingli-Kirche in Berlin. The sound set was built up by Roy Carroll’s talent and care, we placed 8 speakers around the audience in the ugly big church but, masterfully calibrated for the spectrum of my music. It was a diffusion with live spatialitation and I felt the faders were moving without my fingers, the space gave back my music as I never heard it before.

As a spectator, I might say the concert of Bjork Vespertine Tour in Brussels on 26 September 2001. But also a Ligeti concert in Madrid thirty years ago, he came to bow as much as 10 times, audience was mad happy and grateful.

Technology allows me to realize my ideas. I don’t think I use it as a tool but as an instrument. It makes possible to make audible the sounds I hear inside my head. I adore all the phases of the work with technology, from the microphone to the top sophisticated electronic devices, just creating worlds out of pure electricity and air.

11. What did you like most about the MADEIRADiG, what was your favourite moment?

As for the concerts, Phew blew me away. Her playing, precise yet punk, moved me deeply. I have never seen anyone play like that, she is so real. I missed Bob Ostertag concert, but I had a couple of very interesting talks with him, wise man.

I wish all festivals had the charm and the quality of Madeiradig! 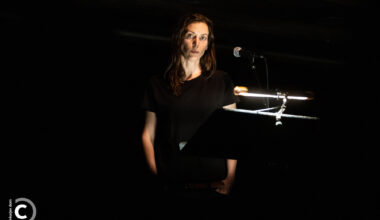 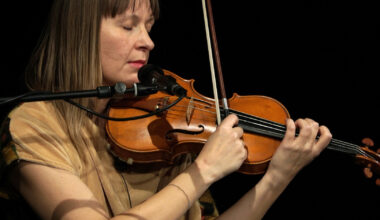