Vorfeld/Chen: In this concert, percussionist Michael Vorfeld and vocalist and cellist Audrey Chen are musically meeting on stage for the first time; regarding their particular backgrounds and ways of performing, their improvisations promise a very intense music. Audrey Chen is a Chinese-American musician who was born into a family of material scientists, doctors and engineers, outside of Chicago in 1976.

Parting ways with the family convention, she turned to the cello at age 8 and voice at 11. After years of classical and conservatory training in both instruments, with a resulting specialization in early and new music, she parted ways again in 2003 to begin new negotiations with sound in order to discover a more individually honest aesthetic. Michael Vorfeld plays percussion and self designed stringed instruments and realises electro-acoustic sound pieces. He works in the field of experimental, improvised music and sound art. Besides solo activities he is a member of different groups and collaborates with artists of different art forms.

Silvia Tarozzi: In Circle Process Pascale Criton and Silvia Tarozzi started from a hyper-chromatic violin tuned in sixteenth-tones and few lines drawn on a piece of paper with a multi-coloured pencil. A dialogue of sounds, colours and words gave shape to the music, through an approach that is, at the same time, analytical and imaginative – intuitive. It became clear that the heart of Circle Process was in the process itself, in preserving the truth and fragility of a state of mind without prejudice or delays, in letting oneself be guided by a gesture along a path marked by iridescent hues.

The textual score of Thirteen Changes casts, through the performer’s creativity, natural or paradoxical visions and sensorial, tactile, proprioceptive suggestions, which stimulate acoustic synesthesiae. The lengthy and gradual process of collection of musical ideas and its documentation through was followed remotely by Pauline Oliveros, who listened to, and apparently waited for, the musical result of her own visions. Serenata by Cassandra Miller is a piece for violin and voice (performed live) that is based on the listening notes on an italian song that is actually never sung or played in the performance, but described with spoken voice and sounds of violin.

Jane Rigler: Flutist, composer, and improviser Jane Rigler creates pieces that play with hidden languages, recall ancestral songs, incorporate playful game techniques and ask the performers to imagine and improvise. In this concert Jane will perform original works such as the calling (2013), which connects her concern for people, languages, environmental awareness, animals and nature using sounds she collects during her travels.

She will also re-perform various pieces from her album, Rarefactions (Neuma, 2015) that juxtaposes dense, breathtaking agility on the instrument with subtle, intimate, practically inaudible resonances as they travel through the flute tube. 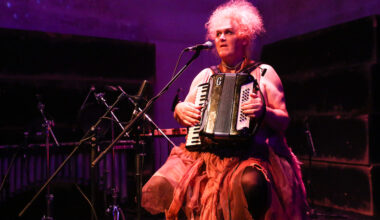