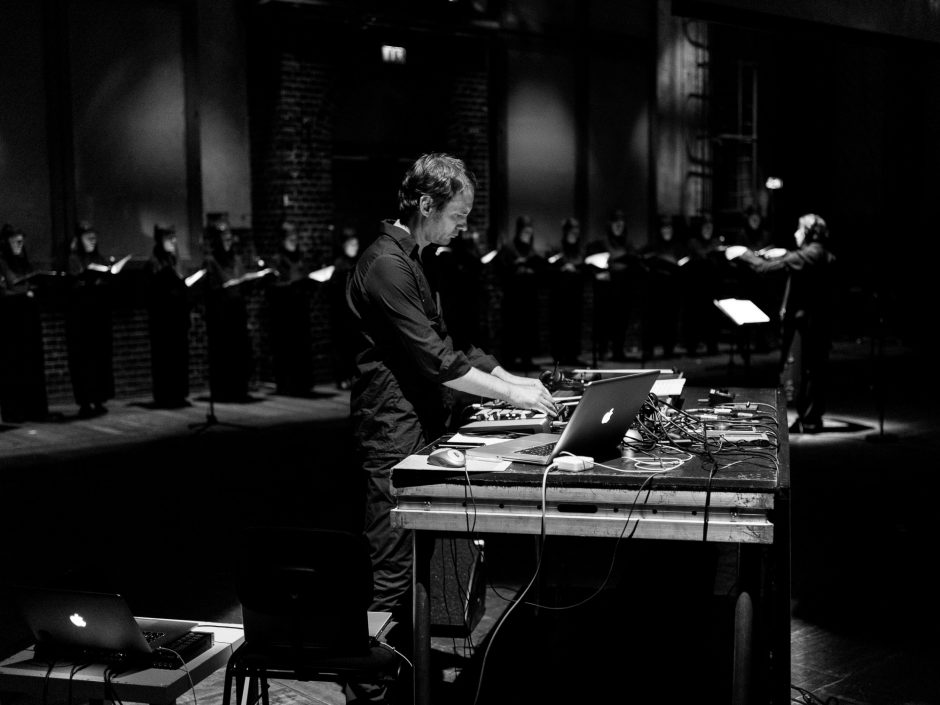 Sven Helbig is a composer for choir, orchestra and chamber music. Electronic sounds often form part of his music. He combines classical composition techniques, with a deep knowledge of electronic sound synthesis and his skills on various musical instruments. Sven grew up in Eisenhüttenstadt, a planned city in Eastern Germany. This is where he discovered music from local brass bands, his parents’ vinyls and the few stations that he could pick up on his homemade radio.

“Listening to Helbig’s choral work you can hear the turn of the universe. It’s astonishing and has far more in common with the atmospheric post-rock of Godspeed You! Black Emperor, or the mesmerizing elegance of Sigur Ros than with Beethoven’s Fifth.”
Drowned in Sound

Electronic bricolage was his first passion and remained an element in his later music. He started out learning clarinet and guitar, later moving on to drums. Sven regularly orchestrates for Pet Shop Boys, like the ballet ‘The Most Incredible Thing’ at London’s Sadler’s Wells Theatre as well as The Man from the Future, which celebrated its debut at the BBC Proms at Royal Albert Hall. Deutsche Grammophone released his debut ‘Pocket Symphonies’. The second album ‘I Eat The Sun And Drink The Rain’, ten pieces for chorus and electronics, came out on the contemporary classic label Neue Meister, where his latest work ‘Tres Momentos’ is released as well.

“…classical music language with a laid-back, postmodern sensibility.”
The Times

The modern drone mess spans from the archaic Kyrie Eleison, to Leopardi’s ‘L’Infinito’, to modern reflections on the human soul as a beautiful but small part of nature. Gentle choral textures meet digital sound creations and layer gentle a capella compositions onto the composer’s pulsing synths. For the live converts the sonically powerful work is accompanied by the hypnotic visuals of Icelandic video artist Máni M. Sigfússon (Sigur Ros; Ólafur Arnalds, Kiasmos). The choir will be conducted by Wilhelm Keitel. The specially designed costumes are creations by acclaimed Berlin fashion designer Esther Perbandt.