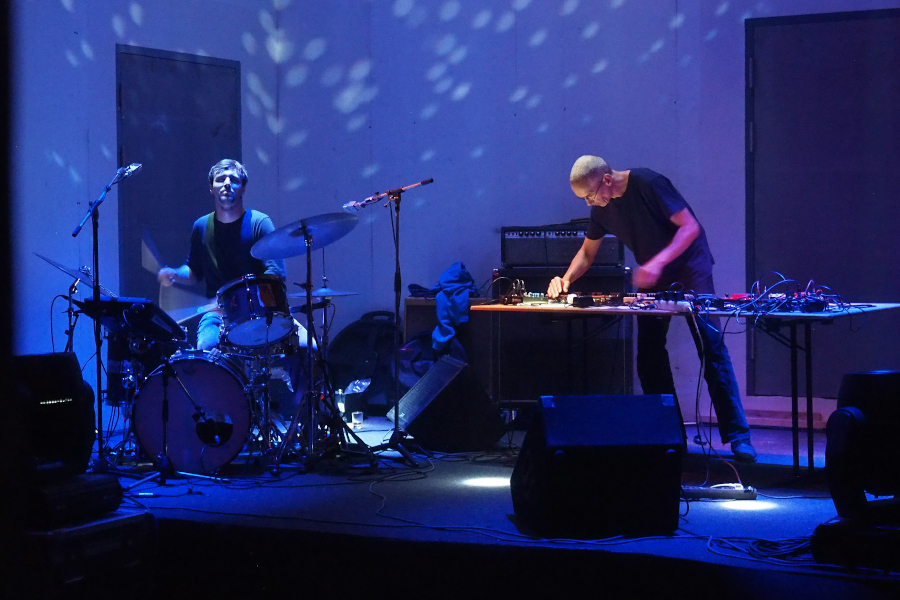 Svetlana Spajic, Andi Stecher and Guido Möbius explore the force fields between two musical extremes. Their music scales harsh mountains of noise or finds its way through fragile soundscapes. It is influenced by abstraction, energy and hypnosis. At times powerful and massive, then also tender and fragile. The Serbian singer Svetlana Spajic is firmly rooted in the musical tradition of the Balkans. Her penetrative voice is the perfect compliment to the feedback Guido Möbius generates with the help of a guitar amplifier, microphone and effects. Momentary slices of sound and concrete, physical acoustics combine with the song to make dense textures. These webs of sound are never statis, rather always in motion. Andi Stecher’s multiplicity of drumming styles works thereby like a motor. Fevered and driving, or cool and abstract. The intensity of the singing is answered and commented on in stark contrast with noise elements and accents created by the drums.

The warm sounding harmonics and lofty feedback are captured by song. In this way music takes shape which finds itself between expressiveness and abstraction. Circling figures of sound fragments made of feedback are on an equal footing with melody and pulse. The play with breaks and reduction opens up vast rooms. Through micro-tonal interference vibrating beween song and feedback binaural beats come about which lead their very own shaky life. A dialogue of sound and noise, brought into being through rhythmic accents and restless beats. A vortex of sound and rhythm, this is music beyond any style. Together Andi Stecher and Guido Möbius make up the duo G.A.M.S., whose debut album came out late 2019 on the Berlin label Karl Records (Keiji Haino, Iannis Xenakis, zeitkratzer, Oren Ambarchi etc.).