A mesmerizingly beautiful documentary about the British artist Andy Goldsworthy. This film by Thomas Riedelsheimer details Goldsworthy’s unique working methods and gives a profound insight into the man’s motivations. With a soundtrack provided by Fred Frith, Rivers & Tides is nothing short of a perfect cinematographic experience.

“Unmissable” is not a term to be used lightly, but this extraordinary film really comes with the highest possible D/B recommendation. 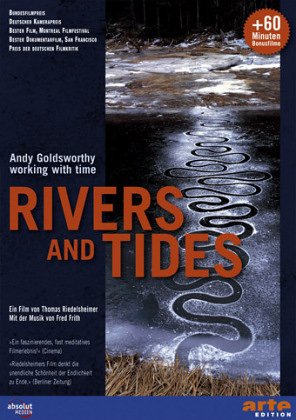 Goldsworthy creates intricate and ephemeral sculptures from natural materials such as rocks, leaves, flowers, and icicles. He has been quoted as saying, “I think it’s incredibly brave to be working with flowers and leaves and petals. But I have to: I can’t edit the materials I work with. My remit is to work with nature as a whole.”[7]  Goldsworthy is generally considered the founder of modern rock balancing. For his work, Goldsworthy often uses only his bare hands, teeth, and found tools to prepare the materials.

A picture tells a thousand words as they say, and this stunningly shot film speaks volumes about the fragility of life and mankinds destructive influence on nature as well as revealing deep truths regarding all that which language cannot come close to describing.

Photography plays a crucial role in his art due to its often ephemeral and transient state. According to Goldsworthy, “Each work grows, stays, decays – integral parts of a cycle which the photograph shows at its heights, marking the moment when the work is most alive. There is an intensity about a work at its peak that I hope is expressed in the image. Process and decay are implicit.”