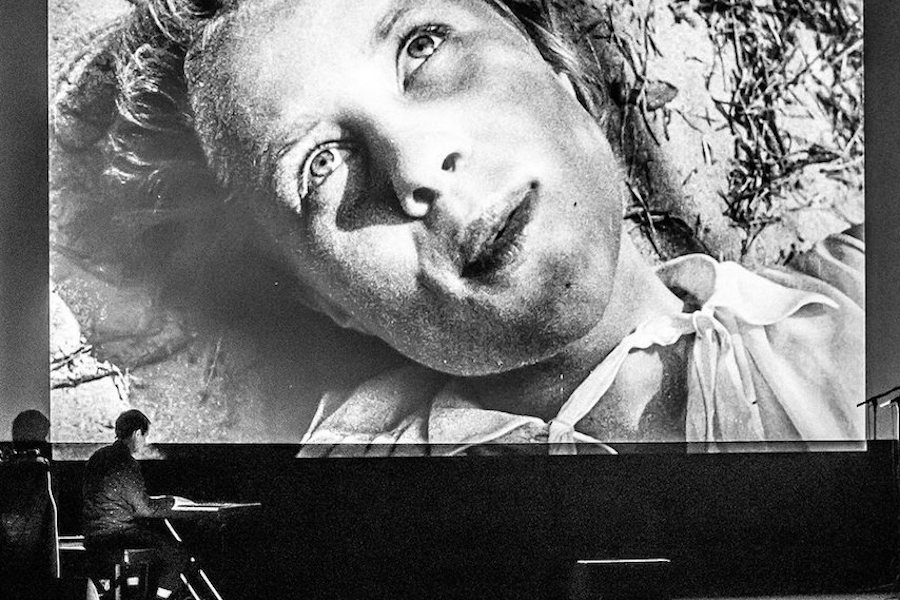 For the last round of the successful series, which has presented almost fifty artists at radialsystem since 2011, UM:LAUT has invited the globally acclaimed band Múm once more to play a live score to a masterpiece of silent film. Right in time for Berlinale, the Icelanders return to the stage of UM:LAUT after their celebrated performances in the last years for two exclusive film concerts: Together with the percussionist Samuli Kosminen, the founding members of múm, Gunnar Örn Tynes and Örvar Smárason, perform live music to the wonderful classic movie “Menschen am Sonntag” – a timeless and vivid portrait of Berlin and its young inhabitants by the end of the 1920s.

The semi-documentary film, which is rarely screened these days, was already considered a milestone of cinema shortly after its release in 1930 and served as a springboard to Hollywood for a group of filmmakers around the young Billy Wilder. As a film score never existed, the screenings of the film were accompanied with songs by Marlene Dietrich in most cases. This is reason enough for the electronica and postrock explorers of múm dedicating themselves again to this historical document in the city of its creation – with the series of UM:LAUT thereby celebrating its last edition with one of its most successful and stunning projects.

People on Sunday (“Menschen am Sonntag”) is regarded as one of “the outstanding works of the German silent film avantgarde” (The International Encyclopedia of Film). In a semi-documentary manner, the film depicts the lives of young people in the metropolis of Berlin by the end of the 1920s. Although the film falls into the final stage of the great era of German silent cinema, it is neither nostalgic nor old-fashioned, but – with its unconventional and surprising images of people, locations and atmospheres, which are captured in a documentary style – it appears more like a protest against the beaten tracks of the old narrative cinema.

Apart from a few well-known protagonists such as the modern dancer Valeska Gert, the film replaces star actors and practised movements with amateur actors and a fresh, spontaneous way of acting. The still undestroyed scenery of Berlin, its people, its streets, the Grunewald Forest, and the Havel River serve both as setting and as supernumeraries . in “People on Sunday”, not much is happening, but its charming, honest and slightly ironic observation of the capital city in a summery weekend atmosphere make the film a vivid, entertaining and timeless document. For the then very young filmmakers, the film, which was created in partly chaotic and precarious production conditions, was both an adventure and a springboard – with Billy Wilder winning several Oscars in his career to come. The history of its creation makes the film one of the first independent films and a forerunner of the neorealism of the Postwar Era.