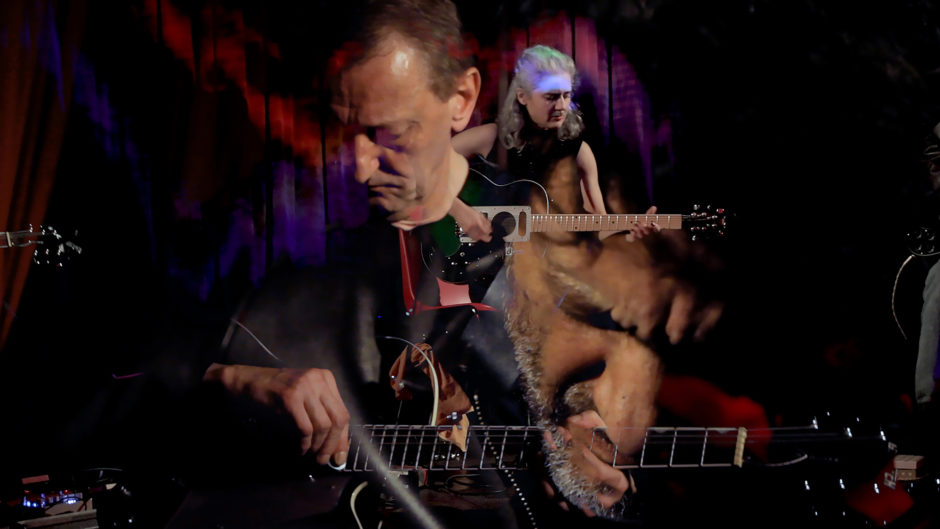 Give Guitars To People record release “The Look Of Silence” at Acud Macht Neu / Thursday 23.01.2020

Recorded, produced, mixed and mastered in Lisbon and Berlin, The Look Of Silence VOL I is the first album of Give Guitars To People, a project by NATürlich (Patrícia Bateira’s Queer Alter Ego) in collaboration with Jochen Arbeit (Einstürzende Neubauten) e Vítor Rua (Telectu). Resulting from the dynamics of togetherness and the variables of here and now, their singular voices gain various spacial heights, depths and widths on a multi-stylistic approach towards grasping an invisible space-time, an abstract place for the musicians’ uniqueness, which positioned simultaneously, progresses and boosts the pure energy of NATürlich, Jochen Arbeit and Vítor Rua’s electronic guitars into a new music category: the meta-idiomatic improvisation. It opens up the infinite abilities of the instrument as a rhythmic, melodic element, with counterpoints and dissonances, in which one finds a diverse spectrum of colours, dynamics, progressions and intentions.

Using the E-guitar as an essential tool in the deconstruction of the normative, as free improvisers, the artists act as sculptors of the same object. Their fusion is not only a cross of their individual musicality but also a single and inclusive musical universe; subjectivity transcending the dichotomy of the ‘I’ and the ‘other’ joining different genres, genders and languages into one.

Reflecting upon universal values, The Look Of Silence VOL I is a response to the silence in the Anthropocene calling upon the importance of the act of listening from where distinct ways of being can thrive together opposing misogyny, neo-colonialism, capitalism and ecological loss.
Positioned somewhere between music and/or atmospheric sound art, Give Guitars To People attempts to break with tradition in the search for innovation, where apparently everything seems to have been invented, but where the E-Guitar can still transcend itself in timbres, frequencies and keys.

The LOOK OF SILENCE VOL I is released by British record label ReR Megacorp, funded by Musikfonds e.V. by means of the Federal Government Commissioner for Culture and Media. The concert has the support of DG-ARTES, an organism of the Ministry of Culture of Portugal, Camões Berlim and Botschaft Portugal (Culture).

Give Guitars To People record release “The Look Of Silence”.