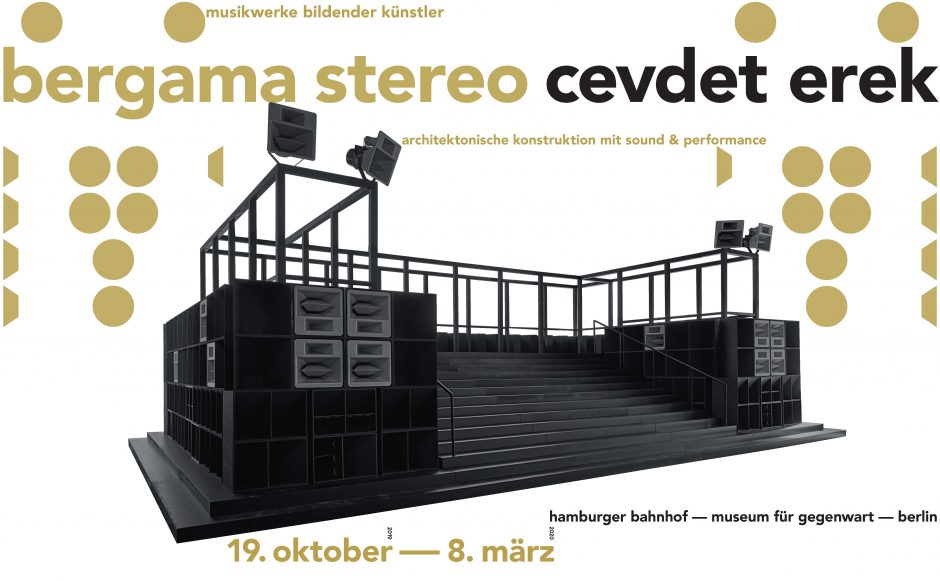 In Bergama Stereo, an architectural installation with sound, the Istanbul-based artist and musician Cevdet Erek references the form, the historically attributed function and the ongoing reception of the Pergamon Altar, now located in Berlin, and creates a new interpretation of the famous Hellenistic edifice, which dates back to the second century BC. Bergama Stereo is a site-specific work. It has been conceived for two locations, each individually connected with the history of the Pergamon Altar and the historical context of its reception and reconstruction. After the work was shown in the impressive industrial architecture of the Turbine Hall on the grounds of the Jahrhunderthalle during the 2019 Ruhrtriennale in Bochum, the installation can now be experienced in the equally impressive Historic Hall of the Hamburger Bahnhof – Museum für Gegenwart – Berlin.

Cevdet Erek conceived the dimensions of Bergama Stereo for each of the two distinctive historic halls in Bochum and Berlin. The Pergamon Altar’s proportions are slightly transformed on a reduced scale of roughly 1:2; the striking black architecture is situated at the head of the respective halls. The Altar’s famous frieze of the giants and gods, also known as the gigantomachy frieze, is interpreted through a multi-channel composition that fills the room with sound. Here, sound assumes the central role that visual elements play in the original Altar, creating a multi-dimensional narrative that relates not only to histories and the past, but also to the here and now. The sculptural frieze is replaced by a large loudspeaker frieze that projects a composition into the space via 34 separate loudspeaker channels. In analogy to the fragmentary remnants of the original Pergamon frieze and its supporting elements, which were reconstructed from archeological finds, active loudspeakers alternate with empty loudspeaker casings.

In his works, Cevdet Erek usually makes use of a reduced palette of sonic elements. These consist of percussive patterns, generated both acoustically and electronically, which occasionally arise from words and sentence fragments in different languages and from onomatopoeic elements and noises. The artist transfers these sound patterns on-site into a multi-channel composition that fills the room with rhythmic sound via a number of loudspeakers. The visitors’ movements and listening activities determine how the composition is perceived. The composition’s structure is determined on site, during the set up of each installation. In the process, the composition changes, it becomes varied and enhanced.

In Berlin, as in Bochum, an integral component of the presentation is the concert and performance program in the exhibition hall. The program picks up on themes and structural aspects of the architecture. Musicians have been invited to relate to characteristic features of the installation such as symmetry, balance, contradiction and the content-related aspects of the work such as history, ritual, power, struggle, conflict, expulsion and migration.