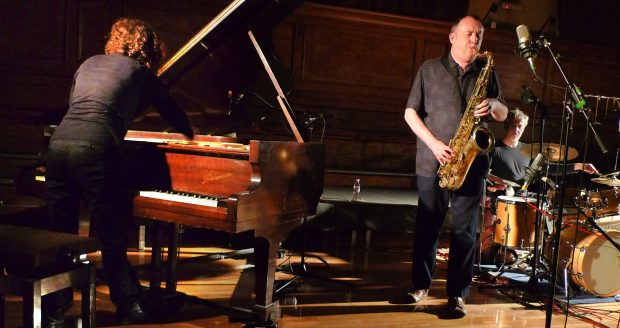 Ignaz Schick is a turntablist, composer, sound & visual artist & curator. In his youth he studied the saxophone and performed in free jazz and avant rock bands under the mentorship of trumpeter Don Cherry. At the same time he was getting obsessed with multitrack tape machines, record players and effect boxes and he started experimenting with many different instruments and sound making devices. After college he briefly studied at the Academy of Fine Arts in Munich and worked for several years as an assistent for the contemporary composer Josef Anton Riedl.

Since late 1995 he works and lives in Berlin where he became an active and integral force of the so-called “Berlin Nouvelle Vague” and the blossoming “real time music” scene. From the middle of the nineties onwards his interest and activities almost completely shifted towards live-electronics and after testing various instrumentations (hard- & software samplers, signal processing, contact mics, field recordings, …) he developed his own and quite unique electro-acoustic set-up which he calls “rotating surfaces”. Various objects and materials (from wood, metal, plastic, paper or violin bows and cymbals) are played directly on the rotating metal plate of the turntable and the vibrations are simply amplified with a small condensator microphone. With this set-up he covers many different styles of contemporary experimental music – ranging from extreme reductionism via ambient, industrial, musique concrete, electronica to harsh noise.

Liz Allbee is an improviser and composer who plays trumpet, conch, electronics and voice. Her work spans many genres, primarily encompassing improvisation, electronic composition, noise, weird pop, and experimental rock. She is interested in extended song structure, in investigating simple forms which combine to create a subtle complexity, in pre-lingualism and the gestures, loops, and tics of communication. Marta Zapparoli is an Italian experimental sound artist, improviser , performer, and musician. Her music mainly consists in strongly narrative sonic pieces that she builds using a wide variety of recording techniques. Although it could be qualified as abstract, Zapparoli’s music reveal an accurate sense of nativity, her soundscapes, built using real-time tape manipulation and mixing, creating sounds that are considered non-musical or overheard are usually qualified as dense, tense & strongly emotional.

Magda Mayas is a pianist living in Berlin. Developing a vocabulary utilizing both the inside as well as the exterior parts of the piano, using preparations and objects, she explores textural, linear and fast moving sound collage. Alongside the piano, Mayas has recently been performing on a Clavinet/Pianet, an electric piano from the 60s with strings and metal chimes, where she engages with noise and more visceral sound material, equally extending the instrumental sound palette using extended techniques and devices. Tony Buck is a drummer and percussionist. He graduated from the New South Wales Conservatorium of Music (now Sydney Conservatorium of Music), becoming involved in the Australian jazz scene. Buck is a member of The Necks and leader of Peril, who he formed in Japan with Otomo Yoshihide and Kato Hideki, and astroPeril. He also formed the short lived L’Beato in the early 1990s, an industrial-oriented outfit reminiscent of Tackhead, which released one EP “The Piston Song”.