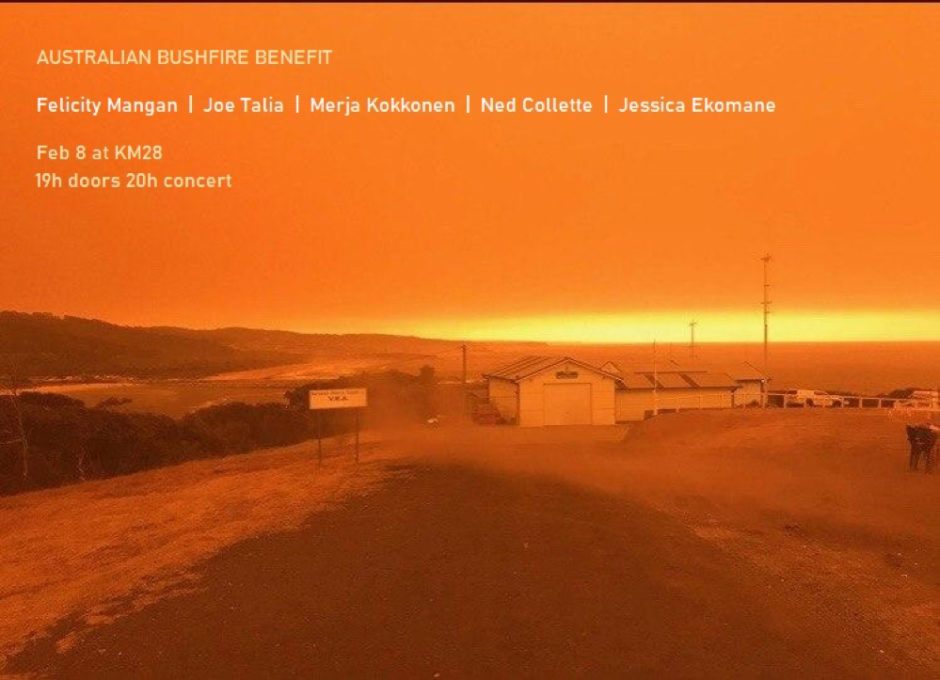 Felicity Mangan is an artist and composer based in Berlin since 2008. Felicity plays her found native Australian animal archive and other field recordings, utilizing electro-acoustic techniques and quasi-bioacoustics, through a stereophonic system and/or often via piezo transducers attached to found objects. Her solo and ensemble work has been released on Shelter Press, Entr’acte, and Longform Editions.

Joe Talia is an improviser and composer who works with percussion, tape and electronics. Focusing on the use of a Revox tape machine and analogue synthesizers in combination with instruments and field recordings, Talia’s electronic works patiently build up sparkling, detail-rich sound worlds of gliding tones, skittering percussion and burbling location atmospherics. In live situations, Talia often uses tape and effects to process and warp his own and others’ playing into uncanny chains of echoes and spectral smears of sound.

Ned Collette is a singer-songwriter whose debut album Jokes and Trials (2006) drew inspiration from Paul Kelly and Nick Drake. After tours with Joanna Newsom, The National, and Bill Callahan, Collette returned with Future Suture (2007), which placed new emphasis on storytelling over first-person confessionals. Over the Stones, Under the Stars (2009) brought in Ben Bourke and Joe Talia, together credited as Wirewalker, followed by 2 (2012), Networking in Purgatory (2014) and Old Chestnut (2018), which added Chris Abrahams, Anthea Caddy and Alexander Garsden to the Wirewalker core.

Merja Kokkonen is a composer, performer, and recording artist. Since her debut as Islaja in 2004, she has released albums on Finland’s Fonal Records, Thurston Moore’s Ecstatic Peace label, and Berlin’s monika enterprise, as well as a series of singles for Not Not Fun and Root Strata. Her most recent album Tarrantullacame was released on Svart Records in 2017. She earned quick praise from The Wire, Pitchfork and Tiny Mix Tapes, among others, for her unique vocal style and daring DIY approach to music composition. She also performs with Monika Werkstatt, an all-female collective founded by Gudrun Gut. This Berlin-based group of international artists organizes workshops, panel discussions and collaborative concerts and aims to provoke discussion about women in electronic music.

Donations will be collected at the door, with 100% of proceeds going to Seed Indigenous Youth Climate Network, aka Seed Mob, Australia’s first Indigenous youth climate network and member of the Australian Youth Climate Coalition (AYCC). In addition to a door contribution, audience members are invited to donate merchandise for us to sell on the night (with all proceeds going to Seed Mob). Don’t forget to bring a few extra bucks to pick up some great tapes, LPs and CDs. Organised by Jasmine Guffond and Julia Reidy.